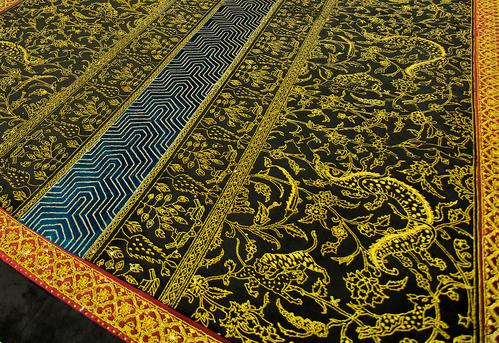 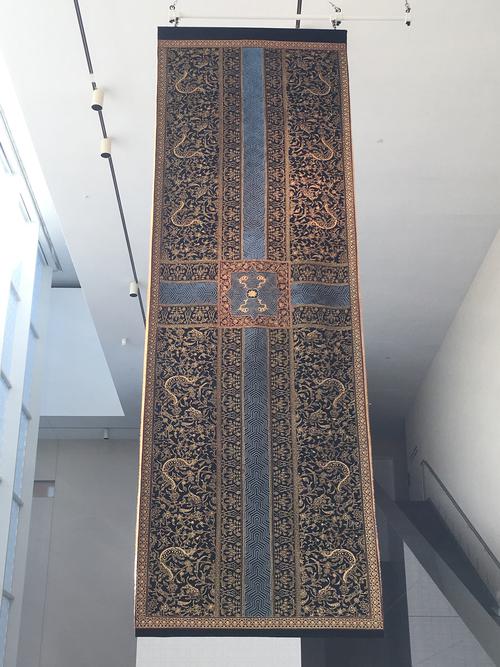 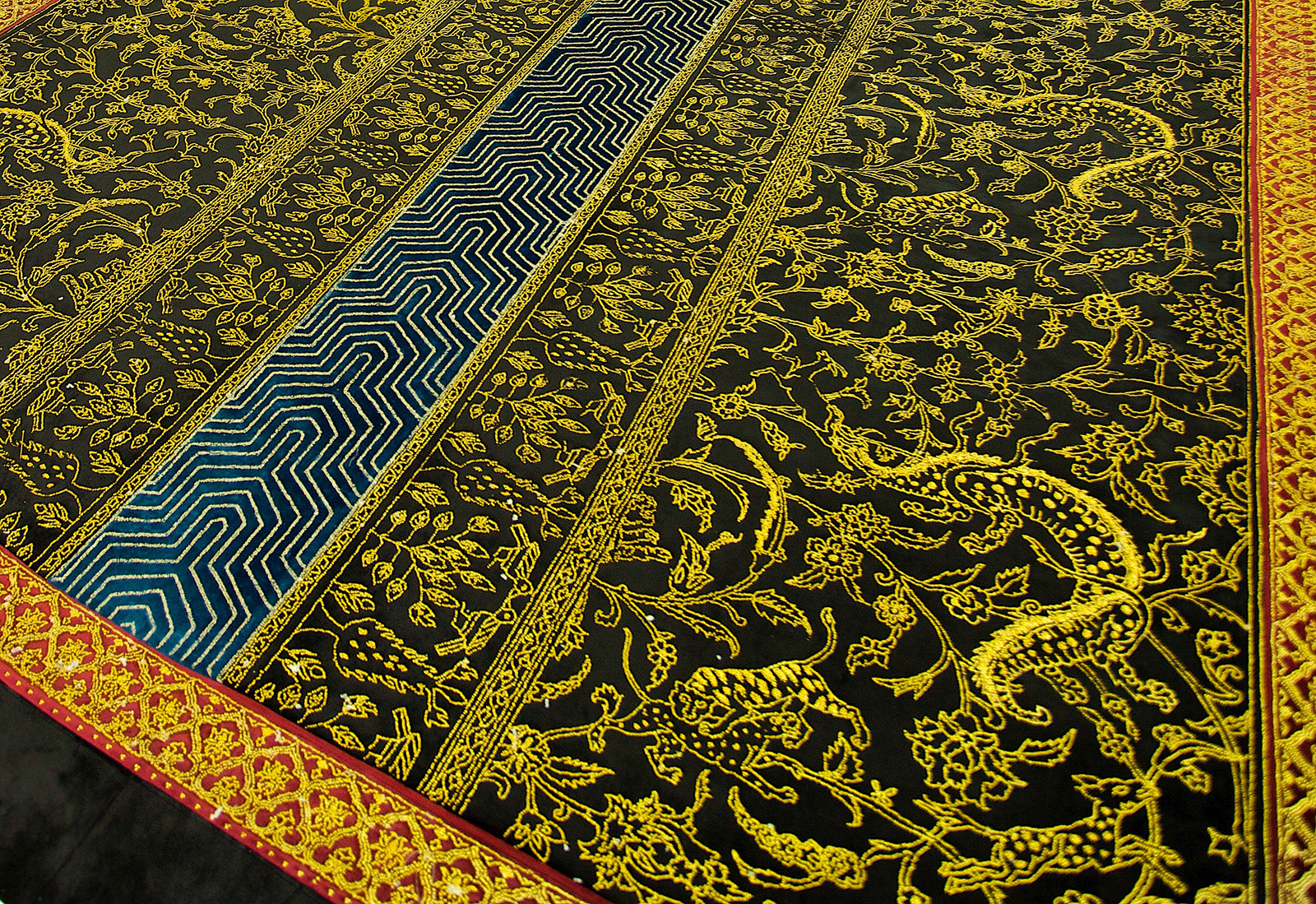 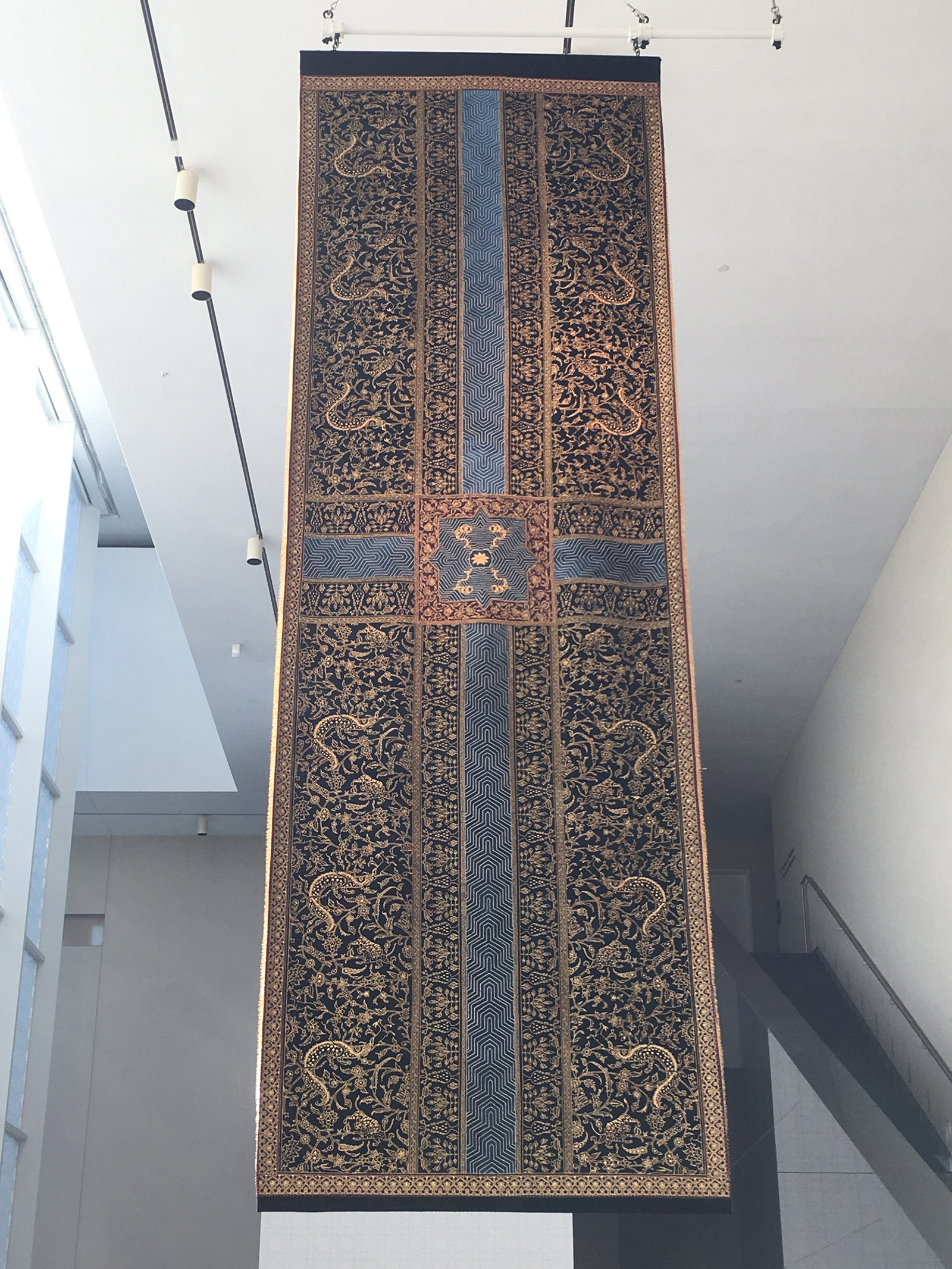 Your Way Begins on the Other Side

The title, Your Way Begins on the Other Side, comes from a poem [3] by the 13th-century Iranian poet, Jalal ad-Din Muhammad Rumi (d. 1273). For her new hanging, Khalid looked to the large panels of glass in the Aga Khan Museum’s inner courtyard to determine the dimensions of the piece, thereby committing herself to the largest work of art she had yet to undertake.[4]

Back in Lahore, Aisha Khalid gathered her materials and found someone to gold-plate hundreds of thousands of steel pins, by hand, dipping strings of pins into the charged solution. She brought together a team of helpers to stretch four sewn layers of the black velvet and red silk she had prepared over a frame that was more than six metres long. A group of women with whom the artist had worked before joined her around the frame, seated on the floor, to “embroider” the piece. Khalid had made precise, to-scale drawings of each section of the work, and she carefully laid and secured these to the stretched fabric. The team of women and the artist then proceeded to push 1,200,000 pins — one at a time, with thimbles on their fingers — through the heavy layers of fabric, tightly following the lines of the drawn template. The gold and silver-coloured  pin-heads thus formed the embroidery thread that drew the intricate details of the tapestry.[5]

Your Way Begins on the Other Side is a large and ambitious work which was completed with mind-boggling speed. It arrived at the Museum in a carefully engineered packing system that supported the piece in folded tiers to prevent damage to the pins on the long journey to Toronto. The rigging crews, present and ready at the uncrating, were able to attach the work at its upper edge while it was still in its crate, and slowly raise the piece in situ. The artist then spent time on an elevated work platform or cherry-picker, carefully examining the surfaces to replace pins that had dropped and secure those that had loosened. The artist’s meticulous planning led to a joyful installation.

In this work Khalid is referencing both the contemporary Islamic garden designed by landscape Lebanese-Serbian architect Vladimir Djurovic on the site of the Aga Khan Museum,[6] and the traditional form of a Persian garden known as the chahar bagh (or “four garden”). On one side of the tapestry, against a backdrop of rich, black velvet, is a quadrilateral garden layout of four quadrants representing the four gardens of Paradise mentioned in the Qur’an. They are separated by paths of flowing water. Each quadrant of the “carpet” contains scenes of wild animals tumbling amid exotic flora as they lock in combat with one another, the strong consistently overpowering the weak, as is the nature of person and beast. But these fluid, arabesque, and elegant forms dance and weave on the surface, captivating the viewer with their beauty while only slowly revealing their brutal force.

When the viewer moves to the other side, the experience is transformed. The shimmering red of the silk on this side is shrouded in an undulating sea of pinpoints that flow like waves as they follow the patterns of their pin-heads on the other side. It looks soft and inviting. One wants to touch and run one’s fingers over the surface. Yet looks are deceiving, and succumbing to temptation would lead to pain. Which side of the tapestry is the “front” and which is the “back” also remains a mystery. 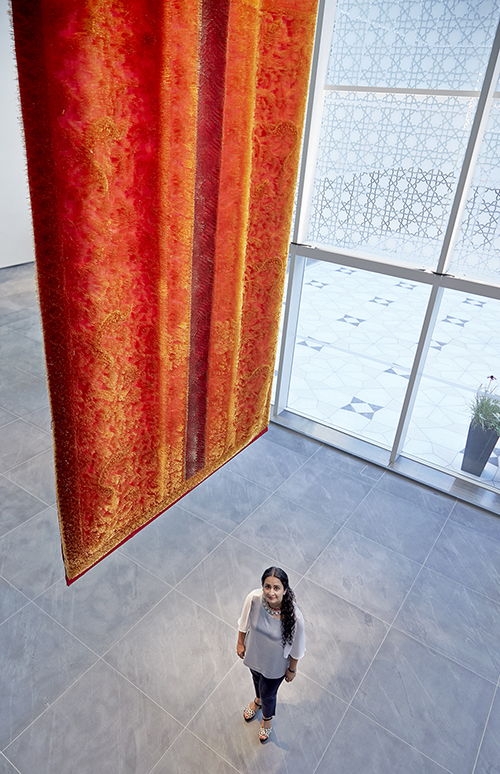 Aisha Khalid standing under Your Way Begins on the Other Side

Viewers of Your Way Begins on the Other Side are at once moved by the tapestry’s undeniable beauty and the obvious presence of so many careful hands in its making, and riveted by its psychological and emotional power. The Museum responded to popular demand when, with Aisha Khalid’s agreement, it kept Your Way Begins on the Other Side on public view after the closing of the exhibition The Garden of Ideas.

The Aga Khan Museum formally acquired the work in 2015.

Notes
Linda Milrod - Head of Exhibitions, Aga Khan Museum, 2011-2016.
[1] Aisha Khalid (b. 1972, Faisalabad) received training in traditional Islamic miniature painting, and graduated from the National College of Arts, Lahore in 1993. A leading figure in developing the contemporary miniature, Khalid has also drawn acclaim for her large-scale paintings, videos, and textiles. She lives and works in Lahore.
[2] Guest-curated by Sharmini Pereira, the exhibition The Garden of Ideas  https://agakhanmuseum.org/exhibitions/garden-ideas-contemporary-art-pakistan featured the work of Bani Abidi (b. 1971, Karachi), Nurjahan Akhlaq (b. 1979, Lahore), David Chalmers Alesworth (b. 1957, Wimbledon, United Kingdom), Aisha Khalid (b. 1972, Faisalabad), Atif Khan (b. 1972, Sahiwal), and Imran Qureshi (b. 1972, Hyderabad). In diverse media, their works explored the timeless theme of the garden. Several commissioned pieces, including Aisha Khalid’s Your Way Begins on the Other Side, drew inspiration from the Aga Khan Museum Collection and the Museum’s own reinterpretation of the chahar bagh or Islamic garden. The exhibition ran from September 18, 2014 to January 18, 2015.
[3] A translation of the relevant excerpt from Rumi’s poem, “Quietness,” is as follows: “Into this new love, die. / Your way begins on the other side. / Become the sky. / Take an axe to the prison wall. / Escape. / Walk out like someone suddenly born into color. / Do it now.” See The Essential Rumi, trans. Coleman Barks. Edison, New Jersey: Castle Books, 1997, 22.
[4] In Your Way Begins on the Other Side, Khalid applies techniques used to create her smaller 2011 tapestry, Kashmiri Shawl (129.54 x 256.54 cm), commissioned by the Sharjah Art Foundation. Part of the Sharjah Art Biennial 2010, the work highlighted a paradox: while Kashmiri shawls continue to be objects of fascination around the world, the region’s longstanding political and cultural challenges have not merited global attention. For details about the work, visit the Sharjah Art Foundation website. http://sharjahart.org/sharjah-art-foundation/projects/kashmiri-shawl-20111
[5] An interview with the artist about her process can be found here:  https://www.youtube.com/watch?v=6avK5F2mQyM&feature=share
[6] As part of Vladimir Djurovic’s extensive study of Islamic gardens, he visited many different historic gardens from Central Asia to Spain. Today, the formal gardens designed by Djurovic occupy the Aga Khan Park, which surrounds the site of the Aga Khan Museum and the Ismaili Centre, Toronto.