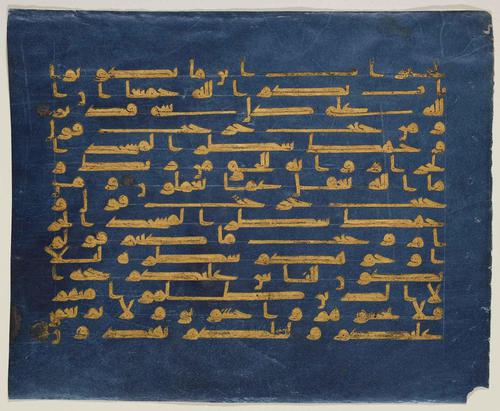 The dispersed “Blue Qur’an” to which this folio belongs is one of the most famous surviving Qur’an manuscripts. The text of this outstanding Qur’an is copied in gold ink outlined in black on a deep indigo-blue parchment. Small silver rosettes (now oxidized) punctuate the flow of the text at the end of each verse and add a decorative element to an already spectacular folio. Although rare in Qur’an manuscripts, the gold-on-blue aesthetic was used in royal manuscripts in the courts of the Abbasids (750–1258) and the Fatimids (909–1171). It can also be seen in the mosaic inscriptions of the Dome of the Rock in Jerusalem, dating to 692, and known from the literary descriptions of the mosaic inscriptions in the earliest mosques in Medina and Damascus. Around a hundred leaves from this Qur’an are known from museum and private collections, including a section in Mashhad, Iran, and sixty-seven pages in a museum near Qayrawan, Tunisia.