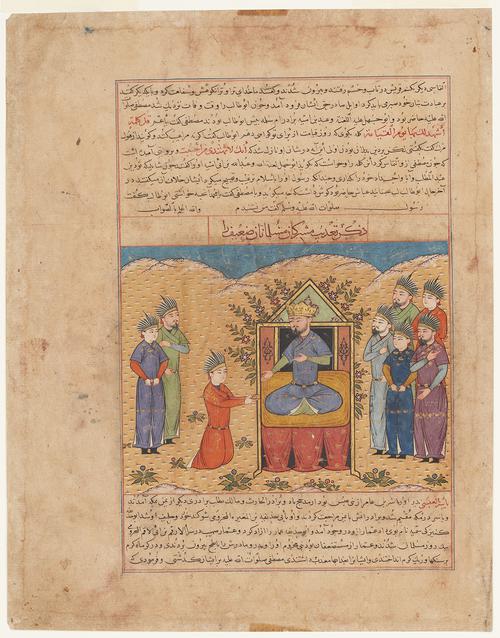 AKM41, Concerning the punishment of an idolator (one of the weak Muslims) 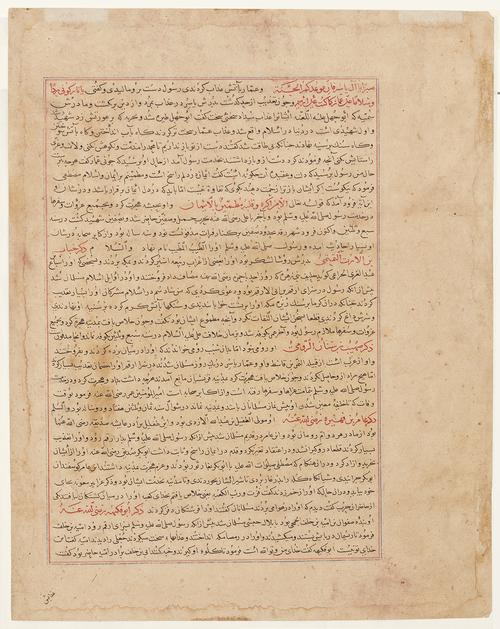 AKM41, Concerning the punishment of an idolator (one of the weak Muslims), Back 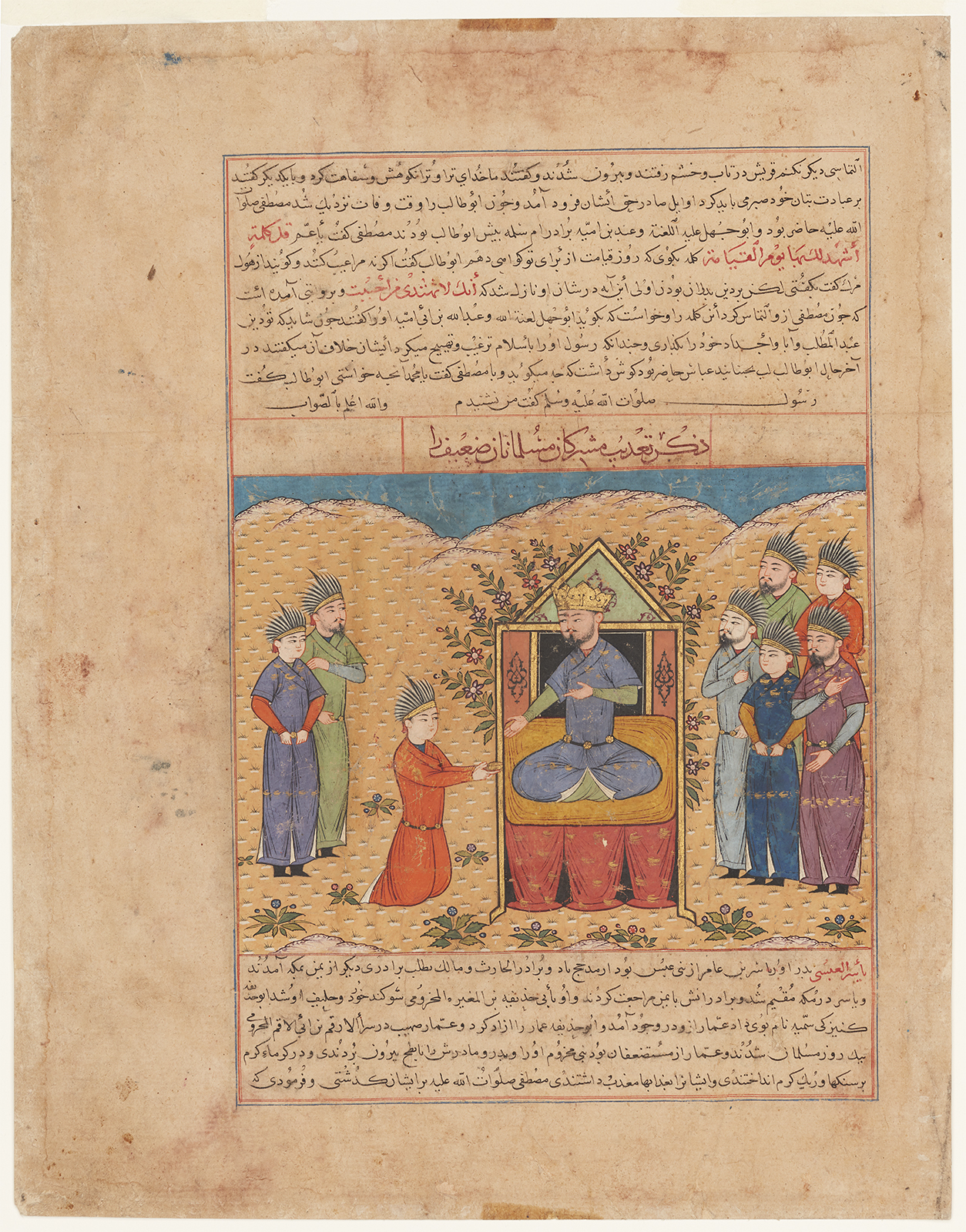 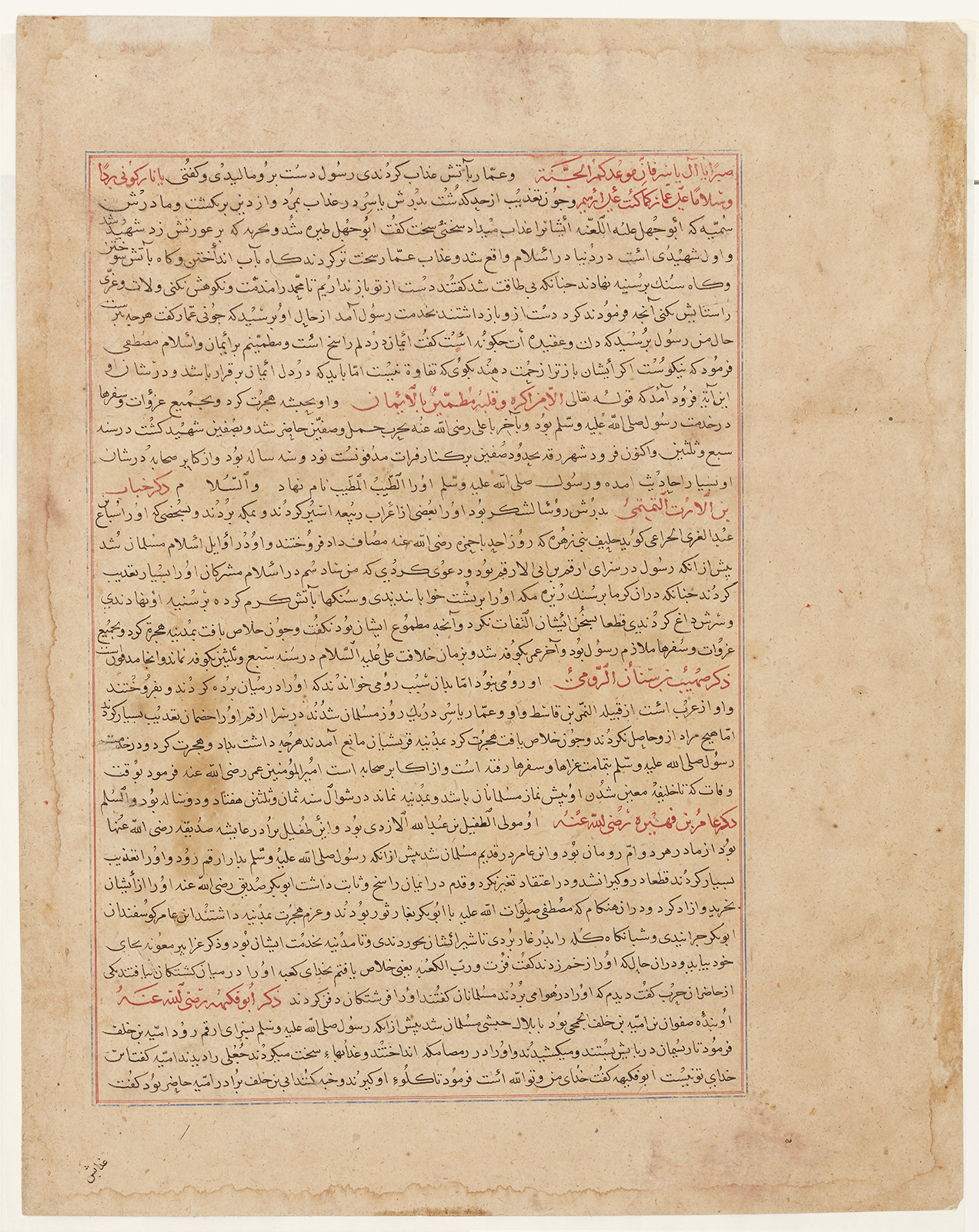 Concerning the punishment of an idolator (one of the weak Muslims)

The world history that Rashid al-Din presented to Oljeitu became the second volume of his famous historical compendium, the Jamiʿ al-Tavarikh (see AKM517 for an important copy of the first volume, containing a dynastic history of the Mongols). This world history consisted of an account of the pre-Islamic past assembled from Iranian, Jewish, and Greco-Roman traditions, followed by a history of Muhammad and the Sunni caliphate through the fall of the Abbasids in 1258 and various dynastic histories of local Islamic dynasties of Iran: the Ghaznavids, Saljuqs, Khwarazmshahs, Salghurids, and Ismaʿilis. These sections were in turn followed by a series of five summary histories of other peoples from across Eurasia: the Oghuz Turks, Chinese, Jews, Franks, and Indians. In its original state, the manuscript from which this folio was taken largely followed Rashid al-Din’s original format, though the history of the Jews has been omitted.[1]  Also, most of Rashid al-Din’s history of the pre-Islamic period has been replaced by another version composed by Hafiz-i Abru, court historian to Shahrukh, in the 1420s. This folio comes from near the beginning of the history of Muhammad.

Rashid al-Din’s world history was assembled from various sources, many identifiable. On the whole, it contributes little original historical information. One of the most notable features of the work for modern scholars is the place it holds in the history of Persian book painting. The Ilkhanid period witnessed significant innovations in the arts of the book. Illustrated volumes were used first to educate the new Mongol rulers in the traditions of the Islamic world and later to demonstrate their command of resources from across Eurasia. Rashid al-Din’s world history was a perfect vehicle for such a display and was elaborately illustrated with figures and scenes reminiscent of the artistic traditions of Europe and China. The work helped set a new standard for elite manuscript patronage in the Perso-Mongol world, inspiring later illustrated historical manuscripts such as the one from which this folio was taken.

In its original form, this manuscript was very heavily illustrated, with at least 150 of its approximately 470 folios containing paintings. Many of these images match the location and type of illustrations found in other 14th- and 15th-century copies of Rashid al-Din’s work.  However, additional illustrations have been added to the manuscript that have no comparanda in other copies. Some of these, like the illustration on AKM89, have been added to blank spaces in the manuscript. Others, such as this image, appear in place of large blocks of text.

In comparing this folio to Rashid al-Din’s text, it is clear that approximately half a page of Rashid al-Din’s text is missing here. Close examination of other folios where such gaps occur reveals no sign that any text was ever written in this space. In other words, the page was originally formatted to hold an image at the expense of text. Naturally, this approach breaks up the narrative of the book, but increases its visual appeal. It can only be concluded that this manuscript was created for display, and not to be read.