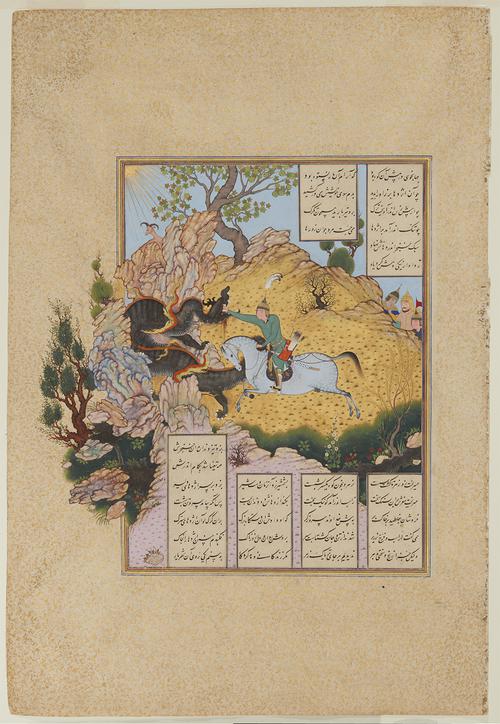 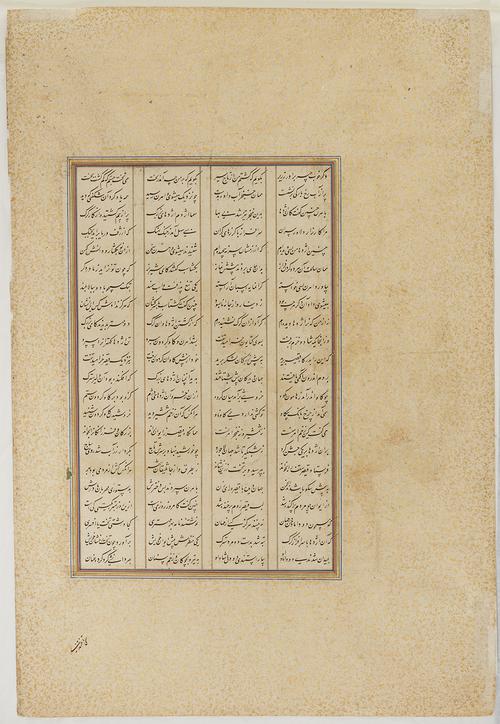 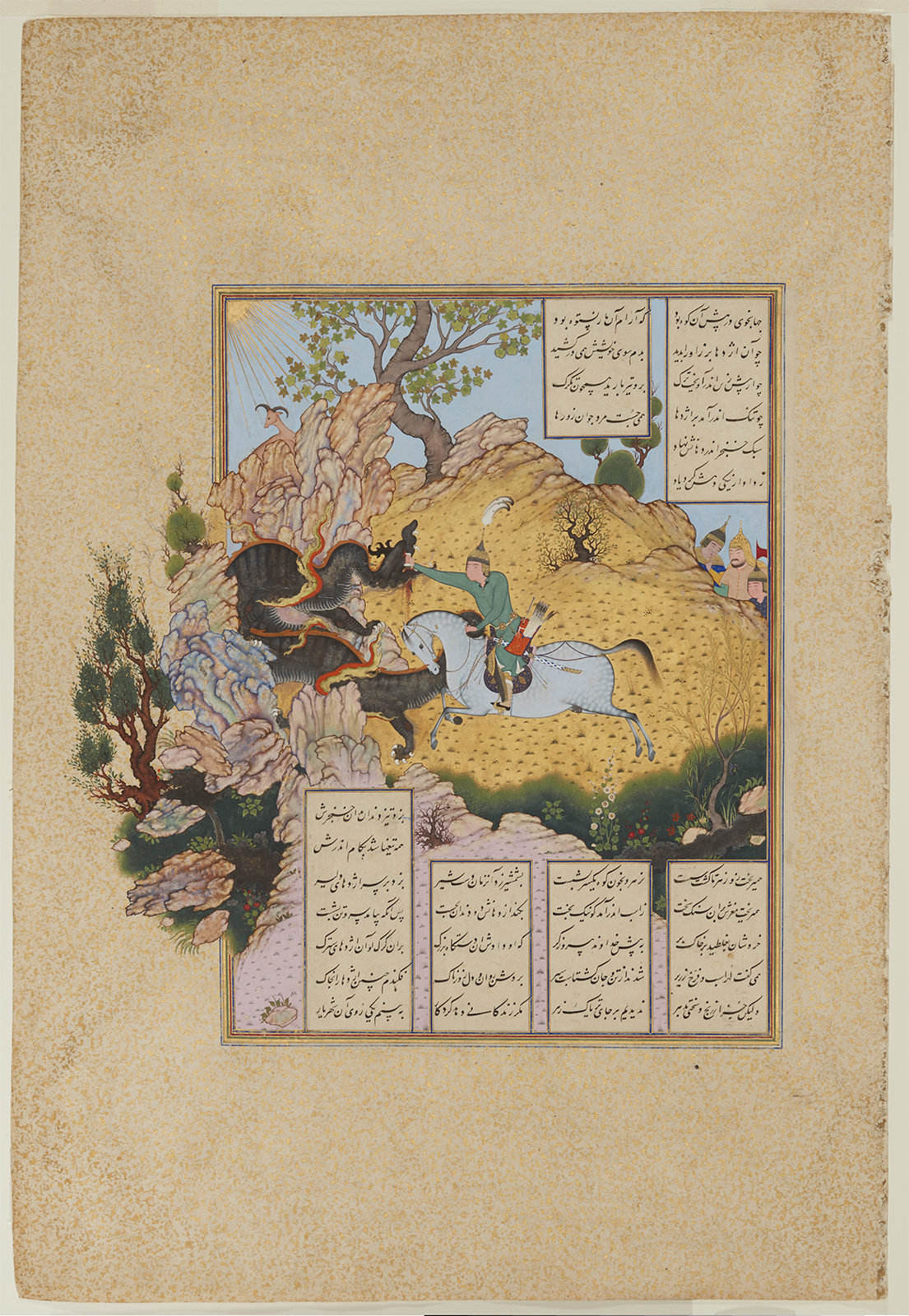 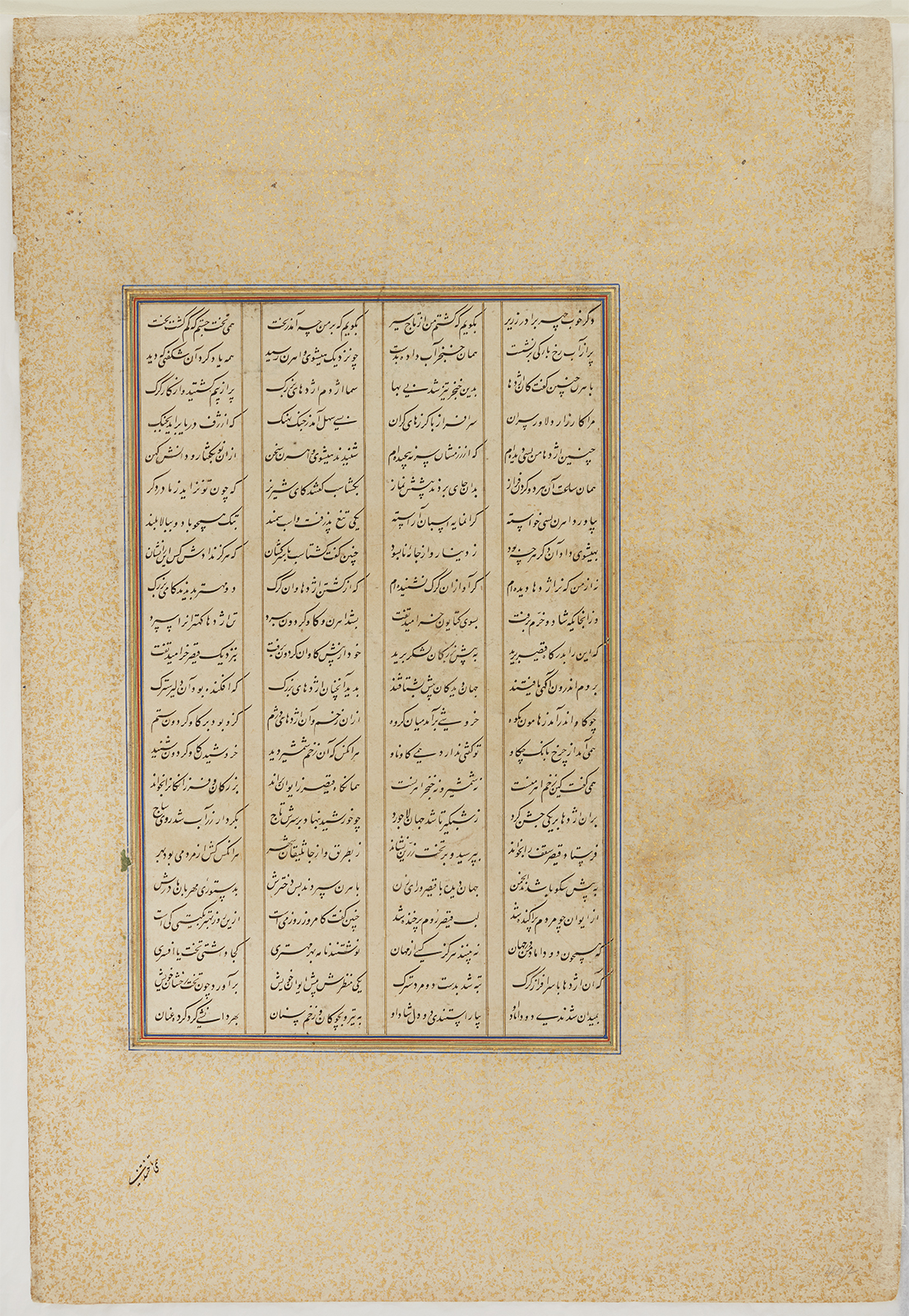 Gushtasp tired of waiting to inherit the throne and left Iran for the caesar’s court in Constantinople. There, he caught the eye of the caesar’s daughter, and wed her. When his remaining daughters were old enough to wed, the caesar required their suitors to prove their mettle by performing feats of daring. Gushtasp agreed to slay a fearsome wolf and a terrible dragon on the suitors’ behalf, allowing them to claim the victories as their own. Although Gushtasp, his companion, and the suitor set out together, only Gushtasp remained when they neared the dragon’s lair on Mount Saqila. The others retreated, quaking with fear. As the dragon tried to suck Gushtasp in with its breath, he showered it with arrows and then rammed his dagger down its throat before polishing it off with his scimitar.

This painting has been attributed to Mirza ‘Ali, the son of Sultan Muhammad, who worked for Shah Tahmasp and other members of the Safavid royal house into the 1570s.[1] As with other members of the second generation of artists who produced the illustrations for the Shahnameh, Mirza ‘Ali’s paintings present a synthesis of the two main styles practised at the Safavid court: those of the Turkmen of Tabriz and the Timurids of Herat. The result is, on the one hand, more spatially logical compositions than in Turkmen painting and, on the other, greater fluidity of line and emotional intensity than Timurid artists produced. Here, on a mountainside bathed in sunlight, Gushtasp and his dappled grey steed bound toward the dragon, who is coiled around rocky outcrops and grasping the horse’s neck with its tail. At the right, a suitor and two companions peek out from behind a ridge, watching the heroic contest between man and beast. One of the companions holds a finger to his lips, a standard gesture of astonishment.

As he developed, Mirza ‘Ali proved to be an incisive portraitist, sensitive to the merest interactions between figures. The same inclination to depict the particularities of individuals extended to his precise rendering of natural forms such as rocks, plants, and animals, as this painting from the Shahnameh clearly shows. Unlike his father, whose “Court of Kayumars” (AKM165) features rocks populated with a multitude of human faces and animal forms, Mirza ‘Ali lovingly paints the irregular surfaces and varied hues of the dragon’s stony lair.

Similar to a number of illustrations of the Shahnameh of Shah Tahmasp, “Gushtasp Slays the Dragon of Mount Saqila” depicts a landscape that extends into the margin beyond the rectangle marked by gold, red, blue and black rulings. This artistic decision amplifies the landscape, providing an opportunity to add a tree and other vegetation as well as a small pool and waterfall, painted in silver that has tarnished to black. Likewise, the now-blackened rivulet that runs through the right foreground provides nourishment for the adjacent grasses and vegetation. The flowers and trees with shoots of new growth suggest springtime, locating the scene in time as well as space. As pictorial devices, the rocks and plants frame the central action, while touches of red—the flowers, the small flag at the upper right, Gushtasp’s quiver, and the dragon’s spine and flames—draw the viewer’s eye across the page and unite the composition.

Notes
[1] Stuart Cary Welch has attributed this painting to Mirza ‘Ali, the son of Sultan Muhammad.