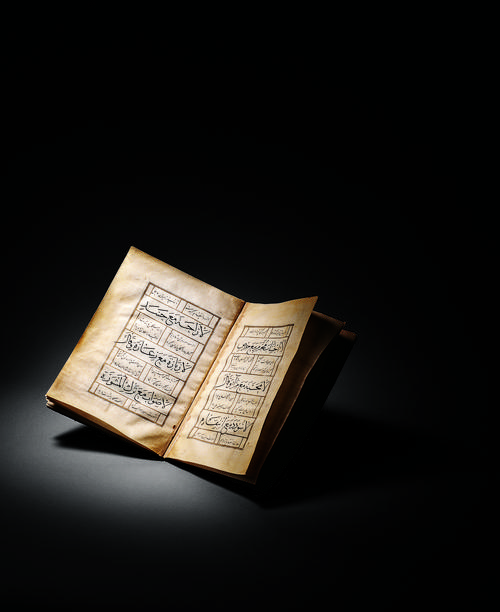 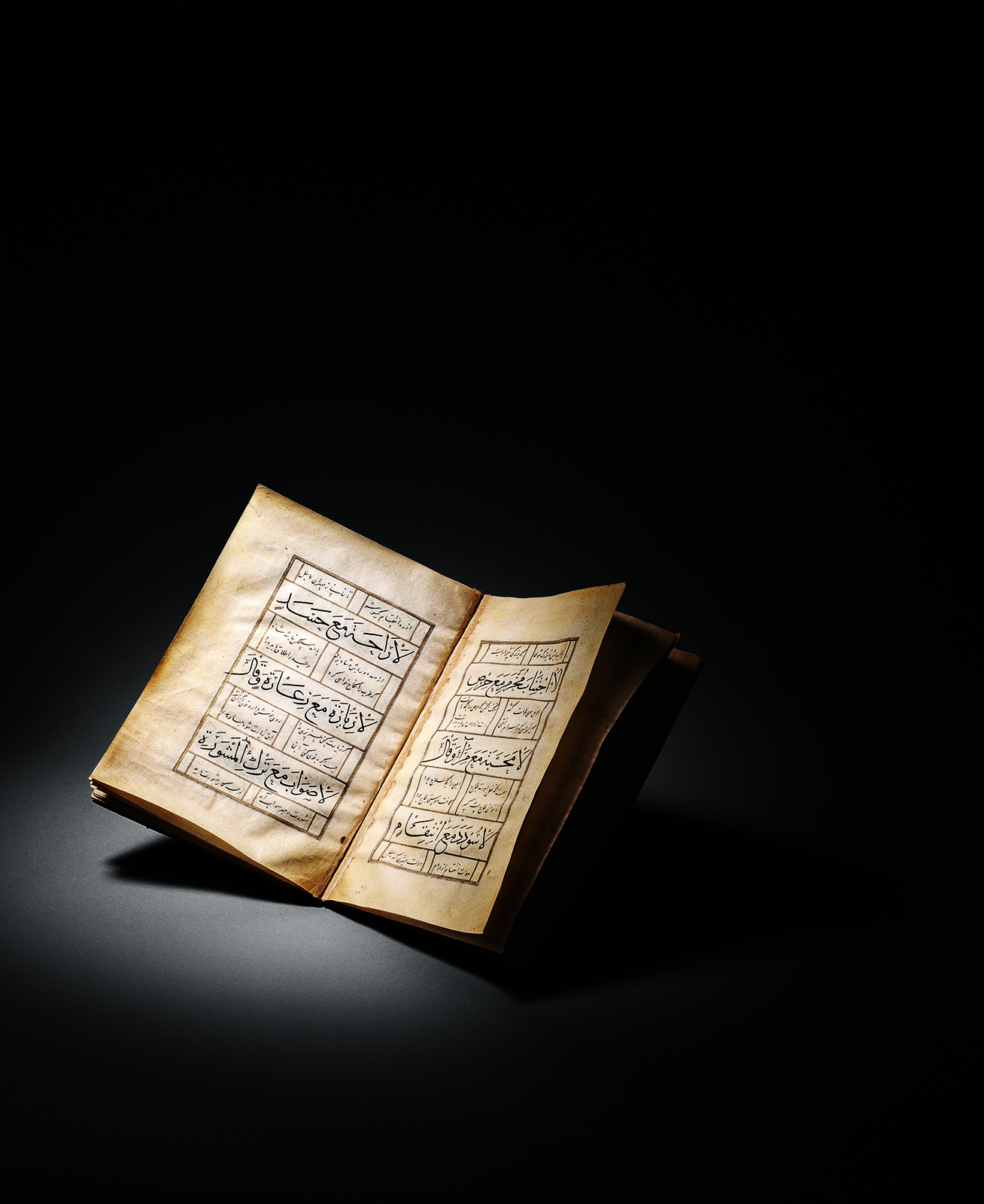 The Sad Kalimah or Mi’at Kalima (One Hundred Sayings)[1] is a collection of wise sayings attributed to ‘Ali ibn Abi Talib (601–61) and gathered by the Arab author al-Jahiz[2] (776–ca. 868).[3] Rashid al-Din Muhammad Balkhi, known as Rashid al-Watwat (d. ca. 1182), translated, paraphrased, and added a Persian quatrain to each saying in his treatise, Matlub Kull Talib min Kalam ‘Ali ibn Abi Talib (What Every Student Needs to Understand the Words of ‘Ali ibn Abi Talib).[4] There are similarities between his Persian verses and the Gulistan of Saʿdi (written in 1258).[5] This manuscript in the Aga Khan Museum Collection contains the Arabic sayings and Watwat’s Persian quatrains, but omits Watwat’s commentaries and opening sermon.

The codex contains 19 folios and two flyleaves, enclosed in a light-brown, leather binding (added later) with tooled, gilt borders. The inside covers or doublures are plain paper pasted on the boards.[6] The text opens with bismillah in a decorated heading, which bears later additions of green and red paint. Each page accommodates three Arabic sayings in large thuluth with six lines of Persian verses in fine nastaʿliq in two columns. All folios are embellished with gold rulings. The ink is slightly flaked in the first few folios. All verso folios carry catchwords.

The manuscript was completed ca. 1464–65 in Baghdad in the hand of the scribe Shaykh Mahmud, as stated in the colophon (f. 19r).[7] We know that Mahmud began his artistic career as a calligrapher and illuminator at the court of the Timurid Prince Baysunghur in Herat, where he was trained and supervised by the nastaʿliq master Jaʿfar Tabrizi (Baysunghuri). The earliest manuscript copied by Mahmud is an anthology of poetry completed in 1430.[8] There, he signed his work “Mahmud al-Jaʿfari” as an indication of respect for his teacher.[9]

Shaykh Mahmud joined and served Pir Budaq beginning around 1458, when Pir Budaq occupied Herat. Mahmud employed the nickname “Pir Budaqi” on several manuscripts, including the Divan of Qasim Anvar, completed in 1459 in Shiraz.[10] Although he does not include this sobriquet in the manuscript from the Aga Khan Museum Collection, this manuscript is very probably one of the last two that Shaykh Mahmud penned for Pir Budaq in 1464–65 before the ruler’s fall from power.[11] His father Jahanshah besieged Baghdad in the same year and Pir Budaq was eventually killed on 1 Dhu’l-Qa‘dah 870/15 June 1466.[12] We have no manuscript copied by Shaykh Mahmud after this date; the few specimens of his calligraphy in the Topkapı Sarayı albums H. 2160 and H. 2153, dated 870 and 871 (1465–67), are the last traces of the scribe after he had left Baghdad and wandered from city to city.

Notes
[1] One significant copy of the Sad Kalima is housed in the Turkish and Islamic Art Museum (ms. 2474), completed in 1471–72, which, in the words of scholar D.J. Roxburgh, displays “one of the most astonishing examples of decoupage” and “is made entirely of paper and glue”. See Roxburgh, The Persian Album, 168–69, figs. 89–90. An exquisite later manuscript is the 1029/1620 Sad Kalima penned by ‘Abd al-Jabbar Isfahani, the prominent pupil of the well-known master of calligraphy Mir ‘Imad al-Husayni. It is now preserved in the Golestan Palace in Tehran (ms. 1868), a facsimile of which was published in 1996. See Anisi.
[2] Abu ‘Uthman ‘Amr ibn Bahr al-Jahiz al-Basri known as al-Jahiz. For more on his life and works see http://www.muslimphilosophy.com/ei2/JAHIZ.htm (last accessed 23 July 2019).
[3] For an account of al-Jahiz’s compilation of this book, see Khwarazmi Mu’affaq ibn Ahmad, 271.
[4] The earliest known copies of Watwat’s Matlub kull Talib are Aya Sofia 2052, copied by Najm al-Qartasi in 1288, and Chester Beatty Library (CBL), Per. 308, copied by Ibn al-Savaji in 1329 in Isfahan. See Arberry, A.J. et al. 3: 72–73. CBL, Per. 180 is a “superbly illuminated” 16th-century manuscript penned by the well-known master calligrapher Shah Mahmud Nishapuri (nastaʿliq) and Muhammad Mu‘in Bayani (naskh). See Minovi, M. et al. in Arberry, 2: 39–40. CBL, Per. 199, is another copy which is significant for bearing the notes and signatures of Shah Abbas and Fath ‘Ali Shah, in addition to the notes of the famous scholar Shaykh Baha’i al-‘Amili. See Ibid.: 63–64. Baltimore’s Walters Museum (W. 615) owns a beautifully illuminated, late 15th-century copy with the Arabic text in lapis and gold thuluth and the Persian verses in black naskh.
[5] For a comparison of similarities between this book and the Gulistan of Saʿdi, see Rashid al-Din Watwat, 41–52. For information on Rashid Watwat’s life, see Yaqut al-Hamawi and Shihab al-Din Abu ʿAbd-Allah, 91–95. For Persian translation, see Yaqut Al-Hamawi 2002, vol. 2. See also N. Chalisova’s entry “Waṭwāṭ, Rashīd-al-dīn” in Encylopaedia Iranica (2011).
[6] The well-burnished, thick, cream paper with no visible chain or laid lines is very likely the type of paper known as Samarqandi tirma.
[7] Yashifosa Seki provides a list of manuscripts penned by Shaykh Mahmud; see 45–60. One of the codices absent from Seki’s list is the anthology of poetry dated 833/1430 in the Astan Qods Razavi Library, ms. 10399. Seki refers to the Sad Kalima (AKM518) as the Chihil Kalima (Forty Sayings), following Bayani’s misidentification of the title. See ibid. According to Bayani, this manuscript was formerly in the collection of Mr ‘Abbas Mazda (at least until 1984). See Bayani, 893.
[8] This anthology includes poems by Baysunghur’s court poets, such as Hafiz Saʿd, Katibi, and Amiri Shahi.
[9] See Soucek, 28. The same signature is found in the Topkapi Sarayi (TS) album H. 2153, f. 161r, displaying Mahmud transcribed six couplets from Katibi Tarshizi in nastaʿlīq in Gazurgah, Herat.
[10] Istanbul, Turkish and Islamic Art Museum, ms. 1986. See Lentz, T.W. & G.D. Lowry, 247–49; 357. For a discussion of the manuscripts produced under Pir Budaq, see Roxburgh, “‘Many a wish,” 175–222.
[11] The other manuscript is the Divan of Amir Khusrau Dihlavi, dated 28 Ramadan 869/24 May 1465, Baghdad, now in St. Petersburg, State Public Library, ms. 104 (see Lentz & Lowry, 368).
[12] “Pir Budaq.” In Danishnama-yi Buzurg-i Islami (The Great Encyclopaedia of Islam), vol. 14: 5600.