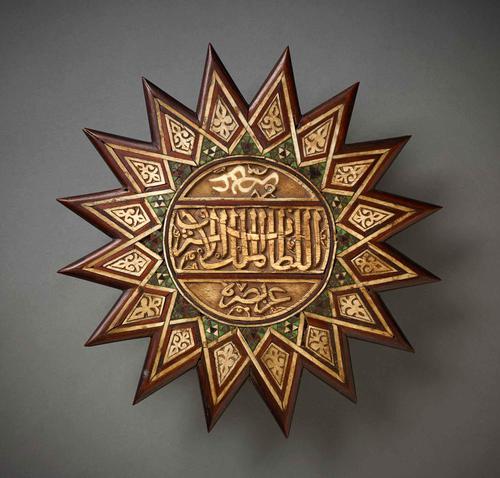 Geometric compositions based on stars and polygons were a common feature of the decorative language of Egypt and Syria under the Mamluks (1250–1517). This sixteen-point star-shaped panel inlaid with finely carved ivory was probably a central piece in a repetitive pattern that adorned the interior of an important building. The inscription in the centre of the panel is the heraldic blazon of the Mamluk Sultan al-Ashraf Qaytbay who ruled between 1468 and 1496. The star-shaped panel was probably meant for one of his architectural projects and bears resemblance to the superb star patterns decorating the wooden pulpit (minbar) of Qaytbay’s complex, which was built in Cairo’s north cemetery in the 1470s. Geometric patterns and heraldic blazons were employed extensively by the Mamluks on a broad variety of objects and in different media.