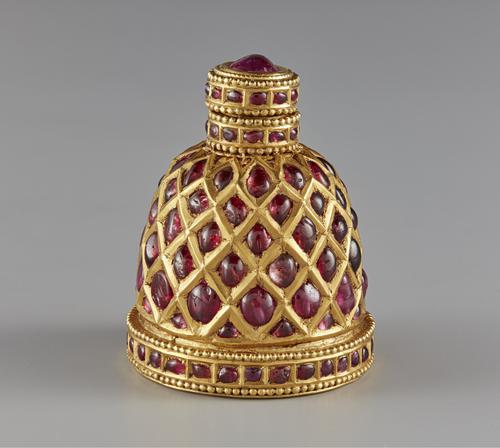 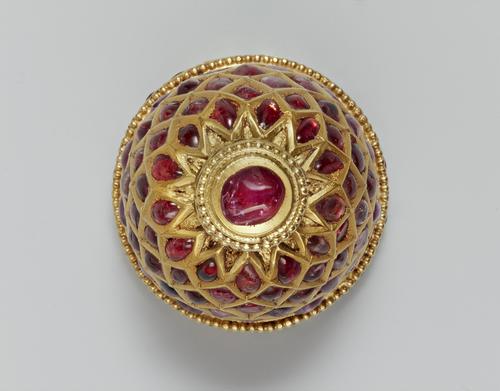 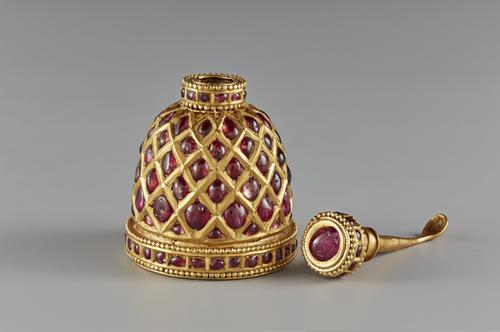 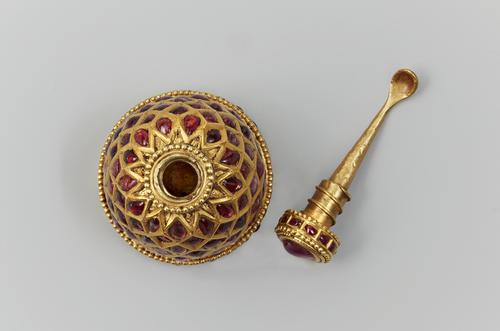 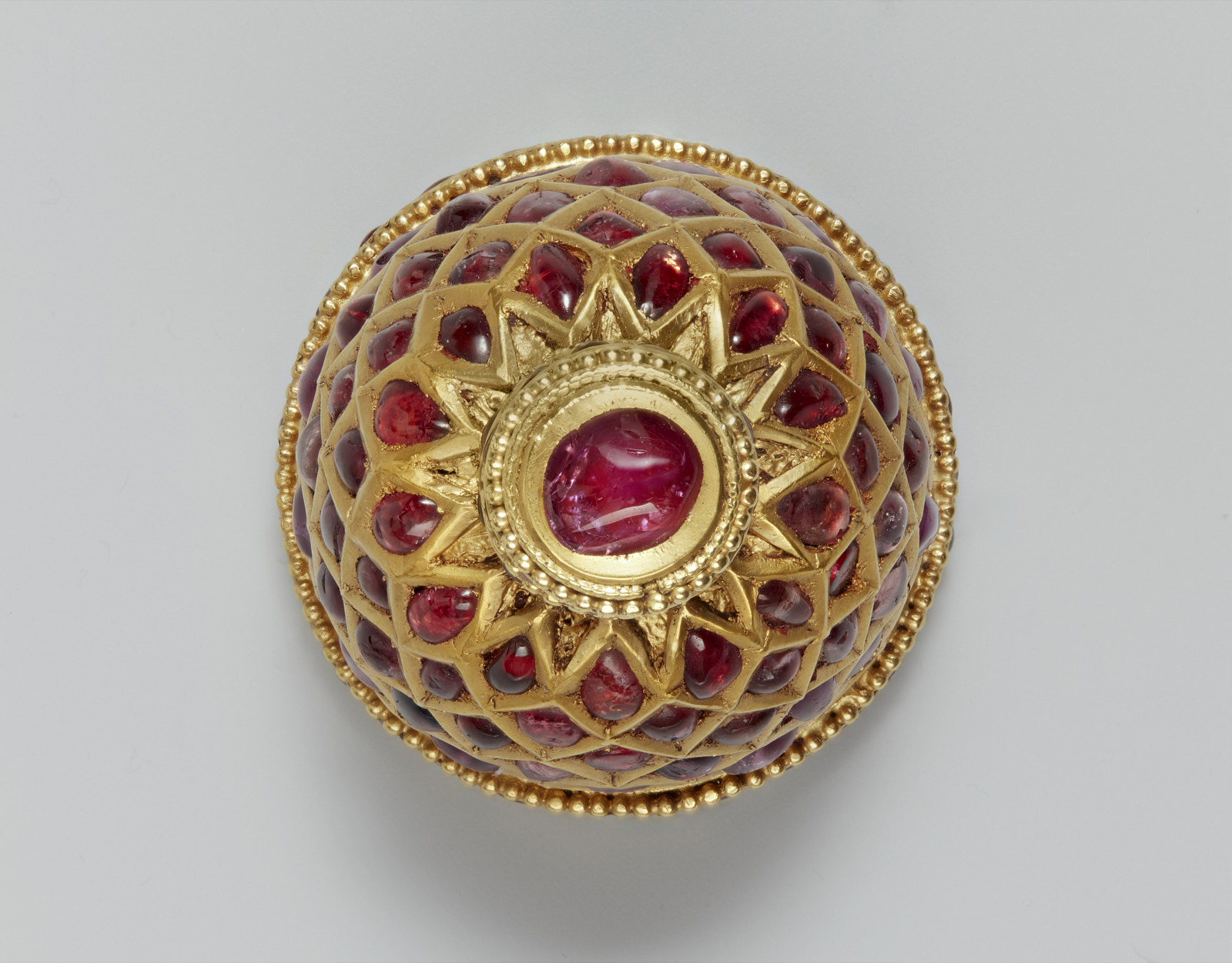 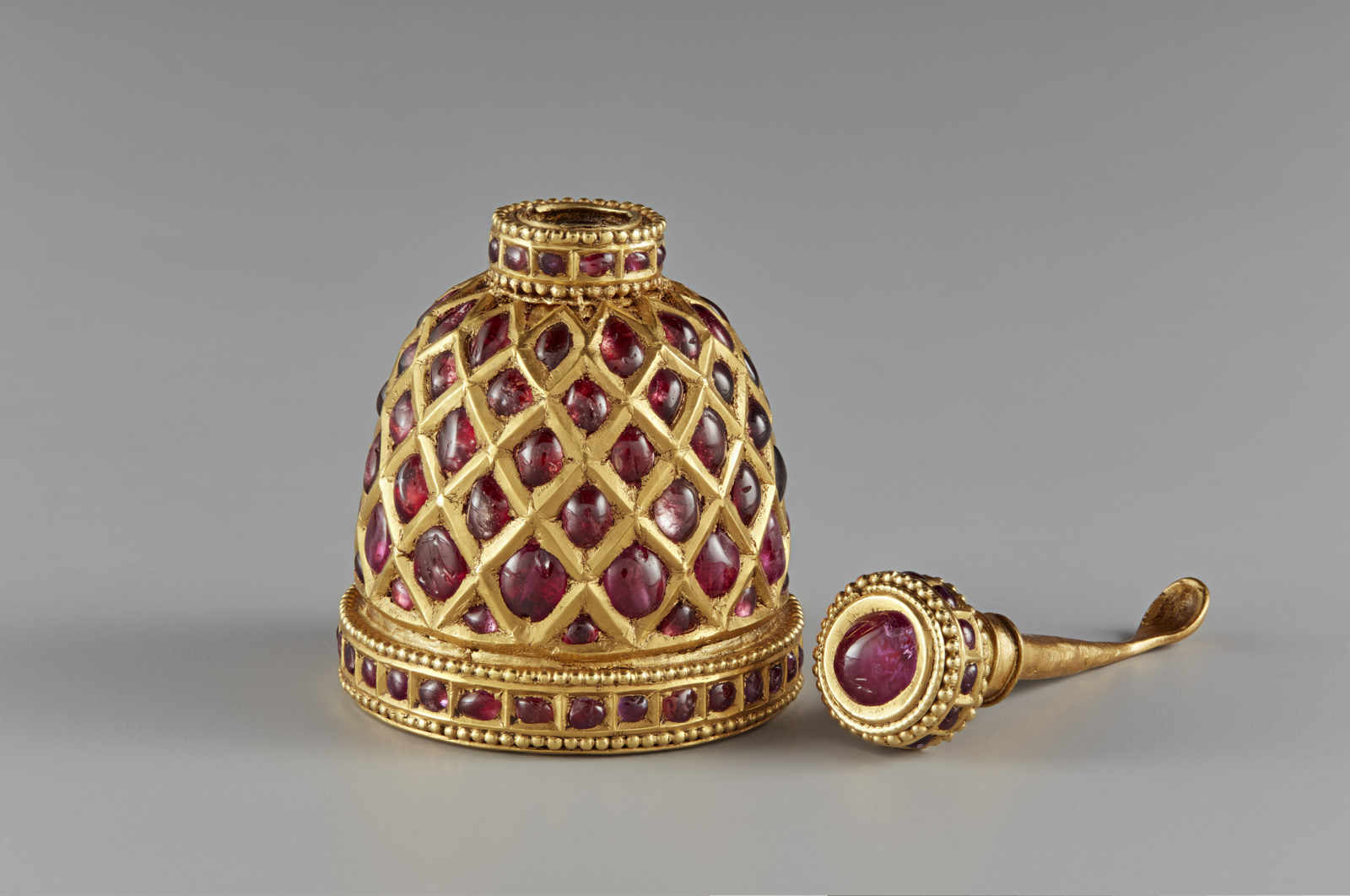 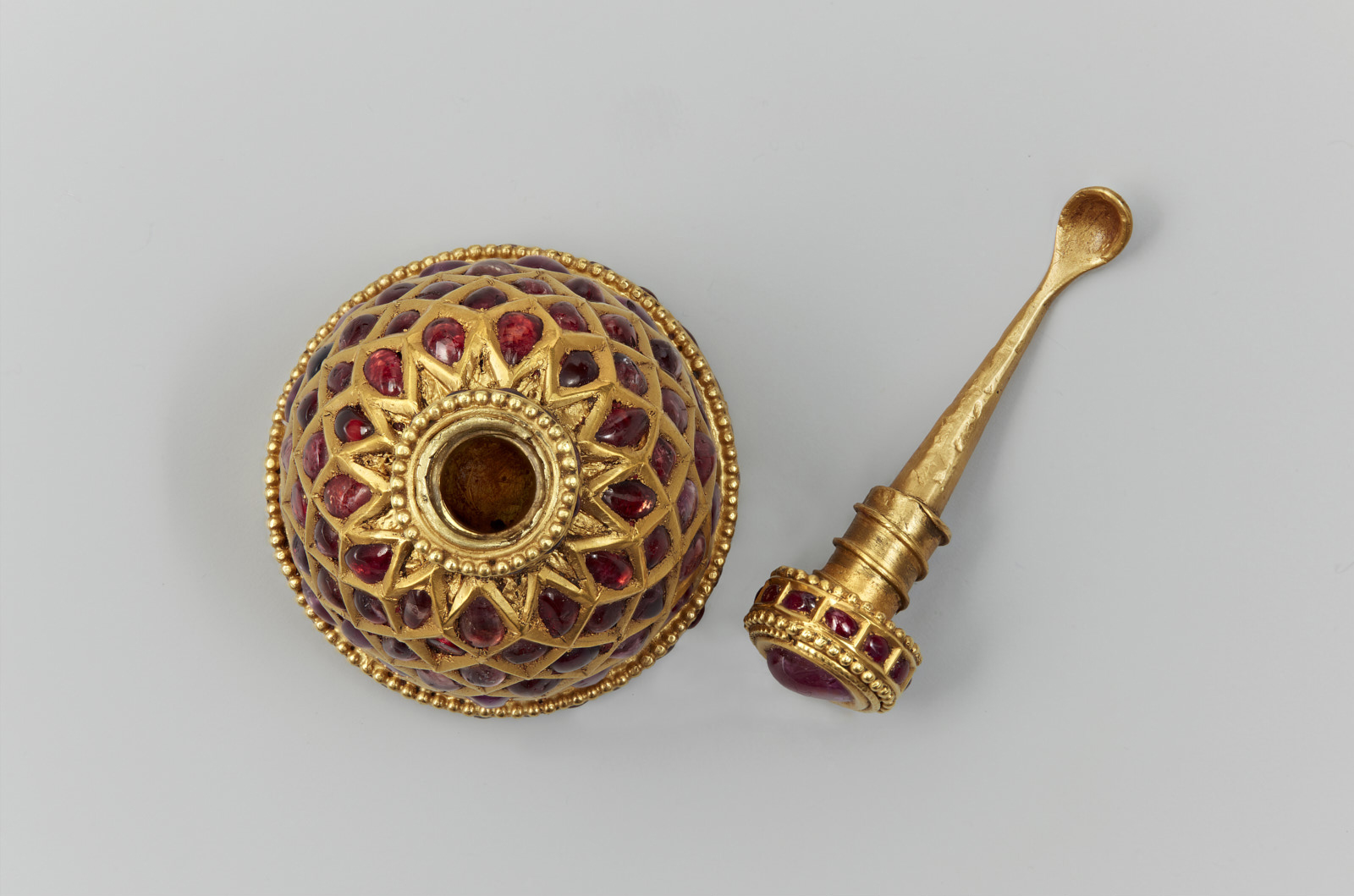 The Mughal Empire was founded in 1526 by Babur (1483–1530), a Central Asian Khan who, after being forced out of his native Ferghana in modern-day Uzbekistan, ventured to India to establish a new dominion. His descendants oversaw a golden age of artistic production and the expansion of a major empire on the Indian subcontinent. The English term “mogul”—still in common use today—references the riches of the Mughals, including sumptuous textiles, jewels, and jewelled objects like this bottle. Art produced during the Mughal period can be viewed as unique hybrids that aligned not only with Central Asian and Persian influence, but also with Hindu culture. Hindu texts ascribed specific meaning and astrological connections to gemstones, and rubies were considered to be earthly manifestations of the sun. Until the late 18th century, no distinction was made between rubies and spinels (known then as “balas rubies”), as both were valued red-stones with princely associations.

The rubies on this precious object in the Aga Khan Museum Collection have been set using a uniquely Indian technique called kundan. In this method, hyper-purified gold is beaten into strips of foil, which are pressed into place to surround the gemstones and hold them into place.[1] An especially adept gem setter has fashioned these stones into a kind of strapwork pattern. As is typical of many Mughal jewels, the core is made of lac, a natural resin produced by an insect. The use of lac as a core in Mughal jewelled objects permitted considerable savings in metal and also resulted in a resilience, heft and stability in objects that would otherwise be quite fragile if hollow.[2]

This particular bottle may have been used for perfume, suggesting the importance of smell as part of a multisensory display of aesthetics at the Mughal Court. Miniature paintings from the Mughal era often depict incense burners carefully positioned to emit scented smoke, and more intimate applications of scents were also an important part of Mughal society. A related small bottle, also covered in rubies set in the kundan technique, is housed in the Al-Sabah collection, Kuwait (LNS 959 J).[3] Such opulent bottles are also known from other materials, including a jewelled perfume bottle made from rock crystal and set with gems in the Metropolitan Museum of Art (1993.18).[4]

The small spoon built into the cap of this object also suggests that it may have been used for snuff, a flavoured and scented tobacco made from crushed tobacco leaves which was inhaled or snuffed into the nasal cavity. Though tobacco in India was most commonly consumed by huqqa, or water pipe, the presence of Europeans in India since the early 16th century may have stimulated the production of a foreign-style object. Tobacco was introduced to India by the Portuguese who picked up this custom from the New World. A related object (44.11a-c) in the Shangri La Museum in Honolulu indicates that snuff bottles were being produced in the 18th and 19th centuries in India.[5] Whatever it may have originally held, the technique, materials, and style of this small object bear the hallmarks of the golden age of the Mughal Empire.