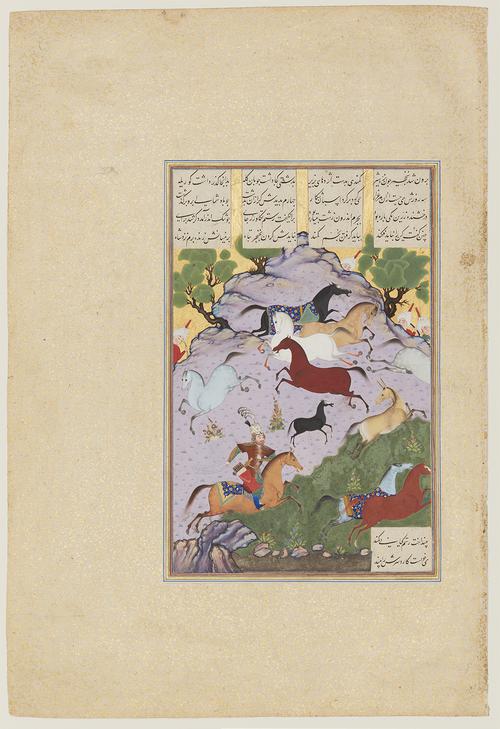 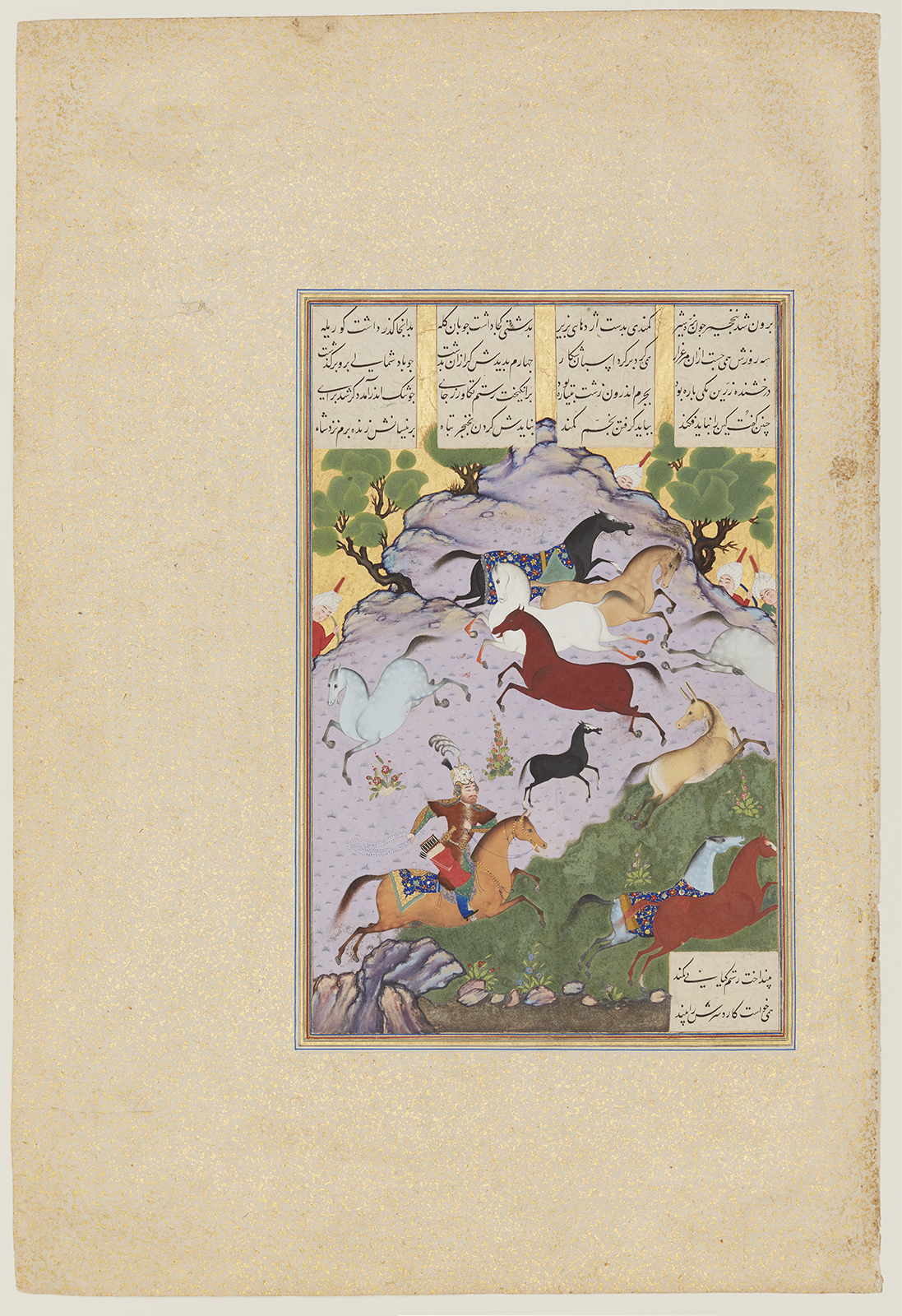 Muzaffar ‘Ali, one of the few artists who spent his whole career working for Shah Tahmasp and his relations, captures the dramatic moments before Rustam throws the lasso. Astride his intrepid steed Rakhsh and dressed in his customary tiger-skin cuirass and leopard-skin helmet, Rustam prepares to unleash his rope as the onager bounds ahead while turning its head back toward his pursuer. The frightened herd of royal horses—two wearing royal saddle blankets—gallop helter-skelter on the mountainside as young men peek over the horizon at the scene below. Horses appear in many of the illustrations in Shah Tahmasp’s Shahnameh, but few are as elegantly proportioned or expressively drawn as these. The dynamism of the animals is mirrored in the undulating line of the grass that draws the eye from Rustam and Rakhsh to the onager. Muzaffar ‘Ali ingeniously guides the viewer’s gaze from the rope to the onager as if to imitate the movement of the lasso being thrown.

Most horses in the Shahnameh are depicted complete or with their rear quarters cut off by the marginal ruling. More audacious artists such as Sultan Muhammad or Mir Musavvir occasionally show a horse with only its back half visible. In this painting, Muzaffar ‘Ali has adopted the latter approach. A dappled grey horse dramatically leaps into the space beyond the ruling at the right, its head entirely cropped. In this way, the artist emphasizes the lightness and speed of the endangered horses.

Born in Turbat in Khurasan province, Muzaffar ‘Ali was the great-nephew of the Herat master, Bihzad, who became head of Shah Tahmasp’s royal manuscript workshop sometime between 1522 and 1524 in Tabriz. Having worked on the Shahnameh as a young man, Muzaffar ‘Ali contributed an illustration to the shah’s Khamseh of Nizami of 1539–43,[1] now in the British Library (Or. 2265, folio 195), and wall paintings to Tahmasp’s new palace at Qazvin between 1544 and 1562, when the capital moved there from Tabriz. He contributed to the Haft Awrang of Jami,[2] produced between 1556 and 1565 for Tahmasp’s nephew, Iskandar Mirza, governor of Mashhad and Sabzavar. Presumably Muzaffar ‘Ali worked on his paintings for this manuscript while in residence in Qazvin.[3] There, he also taught younger artists such as Sadiqi Beg and Siyavush the Georgian, who continued to work in the court after the death of Shah Tahmasp in 1576.4 Muzaffar ‘Ali died shortly after the shah.

Notes
[1] See Dickson and Welch, 155–57.
[2] See Dickson and Welch, 159–163; Simpson, 93–96, 125–132, 194–197 and passim.
[3] Suggested by Dickson and Welch, vol. 1, 155.
[4] Although Shah Tahmasp’s increasingly pious positions on activities that were deemed un-Islamic, such as drinking alcohol, playing music, and artistic reproduction of the human form intensified from the 1530s on, the fact that he retained the services of Muzaffar ‘Ali until his death indicates that he was not completely dogmatic on the subject of painting (see Roxburgh, 243). Other theories for his declining interest in the visual arts, such as deteriorating eyesight, have been mooted (see Soudavar, 51–52). Yet, the fact that he commissioned wall paintings for his new palaces in Qazvin either suggests that his visual impairment was limited, perhaps to myopia, or that he considered it appropriate to decorate royal palaces with poetic imagery and ornamental programs derived from book illumination. Described by Sadiqi Beg as “morally upright and profoundly humane” (see Dickson and Welch, vol. 1, 154), Muzaffar ‘Ali possessed the qualities as a man and as a painter that earned him the abiding respect of Shah Tahmasp.