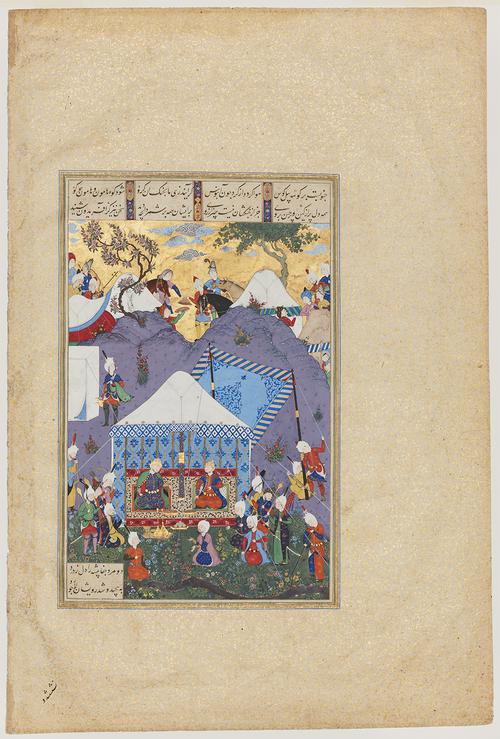 AKM495, Salm and Tur Receive the Reply of Faridun and Manuchihr, Front 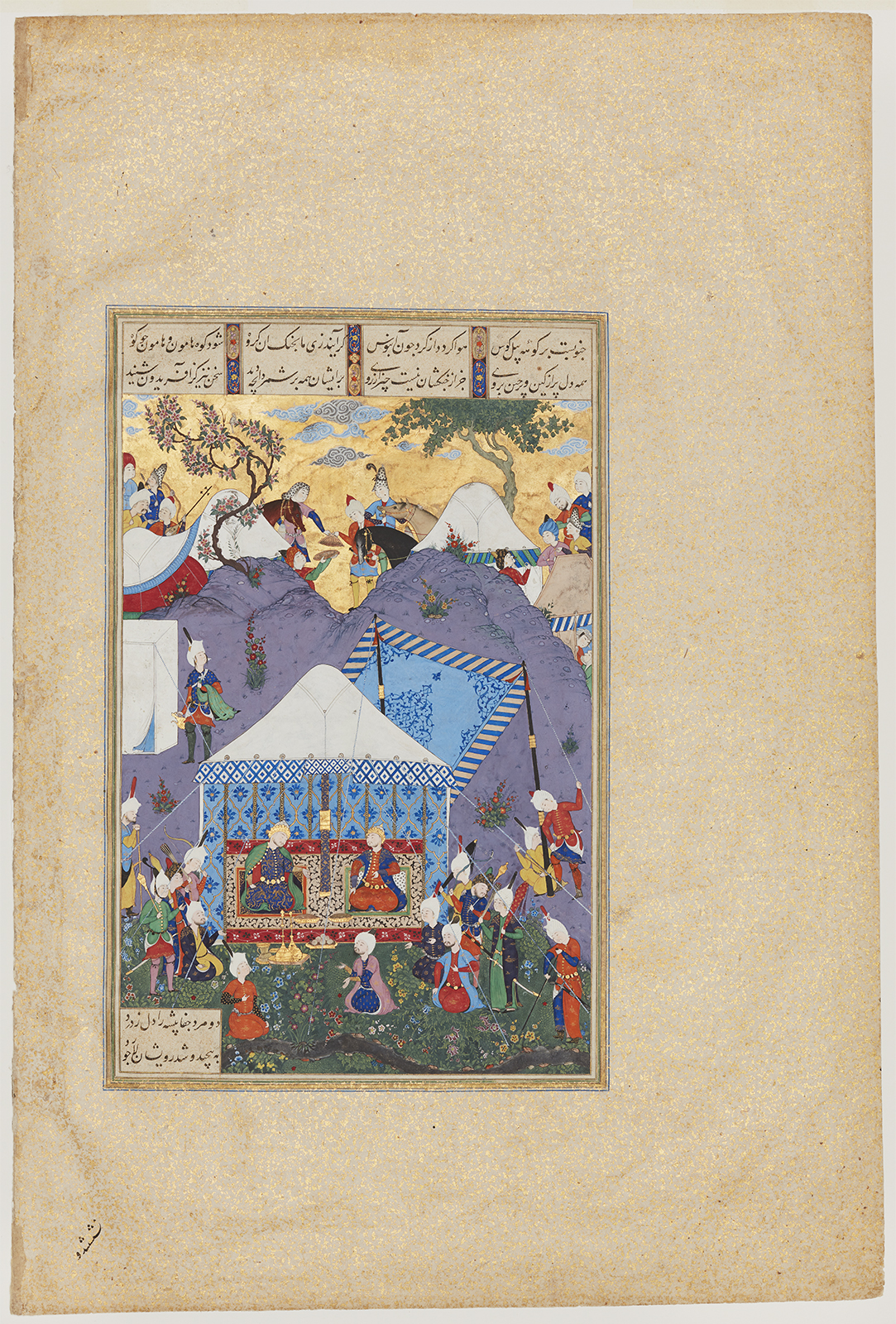 Salm and Tur Receive the Reply of Faridun and Manuchihr

‘Abd al-‘Aziz captures the moment when Tur and elder brother Salm learn that Iraj’s grandson Manuchihr is preparing to avenge his grandfather’s murder. He does not give the princes blue skin, but conveys the intensity of their discussion by the hand gestures of the brother on the left and the envoy kneeling before them, as well as by the courtiers seated closest to their tent. The tent enclosing Salm and Tur is placed slightly off-centre, while the two hillocks in the background and the tents and figures behind them extend the sense of the two brothers’ camps having joined for this meeting. This theme is expressed by a woman and boy from the left-hand group offering a platter of food to the right-hand followers in the notch of the hills.

‘Abd al-‘Aziz is believed to have produced this painting under the direction of Sultan Muhammad, who created “The Court of Kayumars” (AKM165) and other memorable paintings in the Shah Tahmasp Shahnameh. In keeping with the style of Sultan Muhammad, this folio includes many small figures who are ancillary to the composition. It also includes figures familiar from Sultan Muhammad’s other Shahnameh paintings, such as the bearded man standing at the edge of the page with his hands resting on a staff and the man with a jutting chin in the upper right who wears a leopard-skin cap.

As with most of the illustrations in the Shahnameh of Shah Tahmasp, this folio contains numerous details that lend insight into the material culture of 16th-century Iran. The main tent is designed for an audience, open across one side so its panels of blue and gold lining are visible. Extant Safavid tent panels are made of velvet, but cotton, linen, and silk were used by the Ottomans and may well have been found in Safavid tents as well.[2] The awning erected behind the tent would have kept direct sunlight off the tent and at times could have been employed for shading a king or prince. At the left edge of the scene in the middle ground is a small rectangular tent with a flat roof. This would have been the latrine, with a servant standing by to help its users wash and dry themselves after use. Although the artist has not differentiated between the tent types of Turan, ruled by Tur, and those of Rum, Anatolia and the west, ruled by Salm, several variations appear along the horizon.[3] Since such utilitarian objects as tents rarely survived intact, this painting is a useful document of some of the features of Safavid encampments.

Notes
[1] The relevant hemistich of the poem referring to the brothers are blue-skinned appears in the text block at the lower left.
[2] See Atasoy 2000, 107–8.
[3] At the right edge the tent enclosing two women appears to be made of undyed cloth and has a flat top, whereas the two tents behind the peaks of the hillocks are probably round. Finally, the tent at the far left is red and bulbous, covered with a white tent roof that is draped over its neighbour.