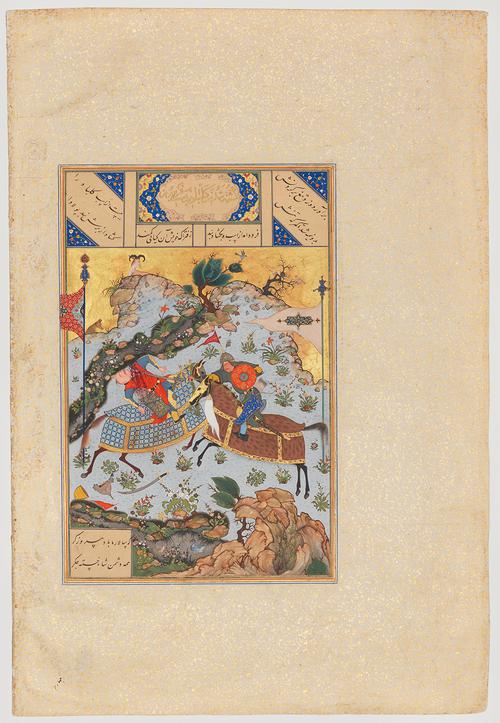 AKM497, The First Joust of the Rooks: Fariburz versus Kalbad, Front 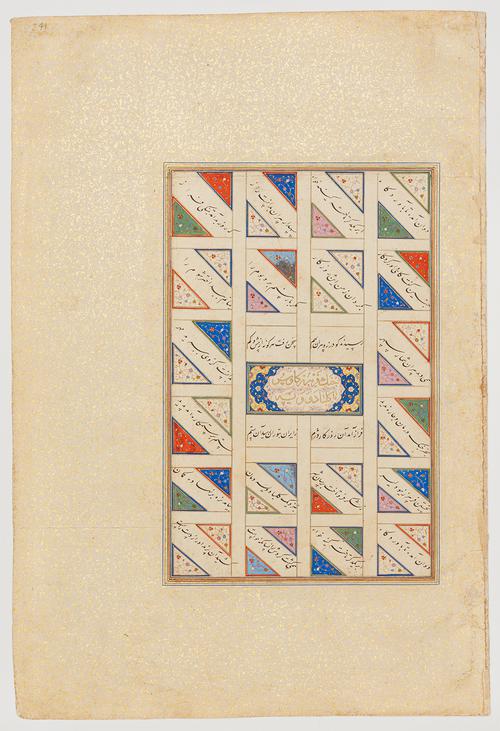 AKM497, The First Joust of the Rooks: Fariburz versus Kalbad, Back 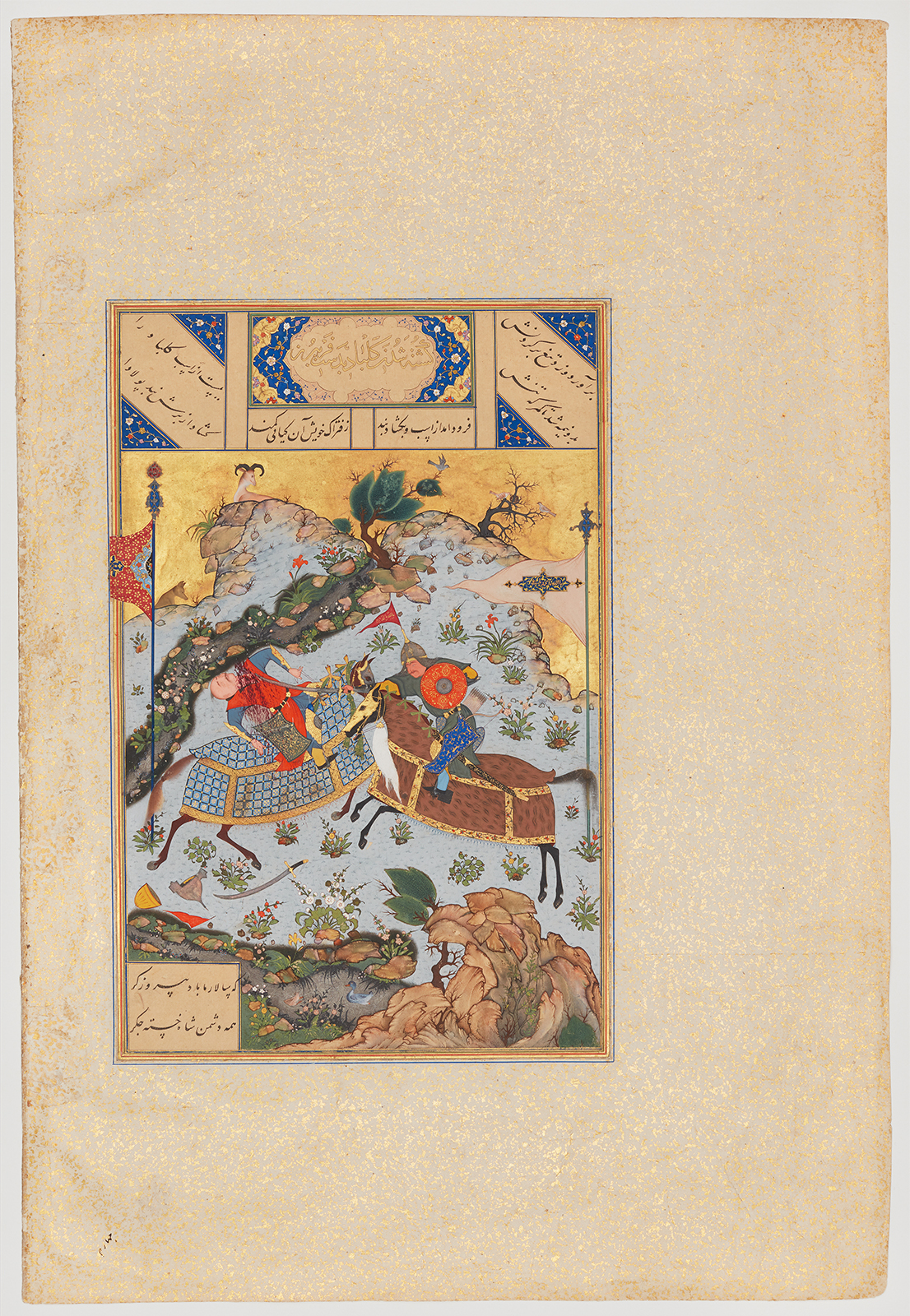 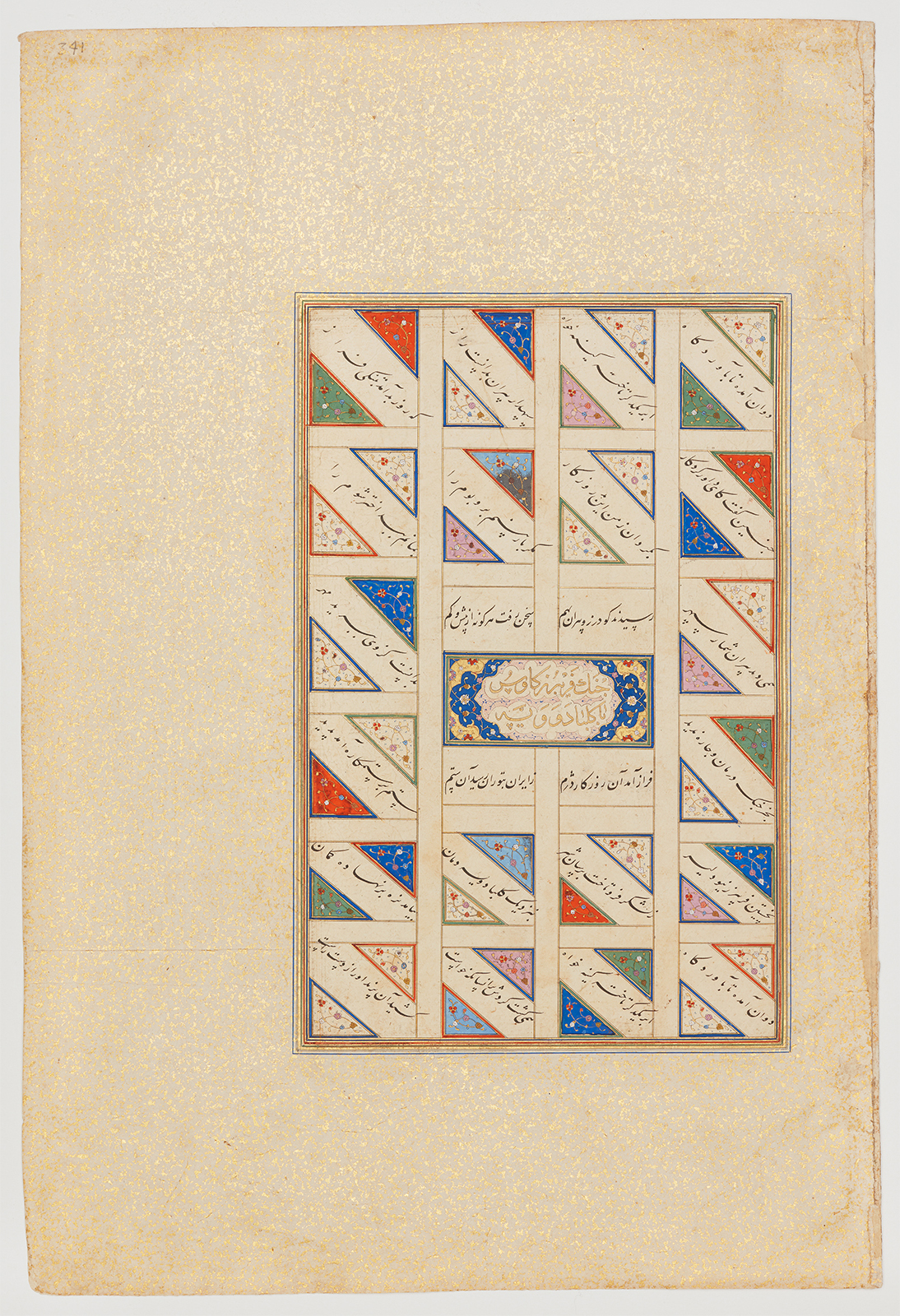 The painting has been attributed to Shaykh Muhammad,[1] a pupil of the painter Dust-i Divaneh and one of the youngest artists to work on Shah Tahmasp’s Shahnameh. The reasons for this attribution are stylistic: namely, the inclusion of a gnarled tree in the landscape and the treatment of rocks and outcrops as rodent-like forms.[2] Rocks with the same pointed, snout-like details are found in one of the ten illustrations that Shaykh Muhammad is said to have completed between 1556 and 1567 for the Haft Awrang (a set of poems by the Timurid poet Jami).[3] Interestingly, a similar technique was also adopted by Dust-i Divaneh, raising the question of whether Shaykh Muhammad absorbed the idea from his teacher before the elder artist left Iran for the Mughal empire.[4]

In his preface to an album he compiled in 1544 for Shah Tahmasp’s brother, Bahram Mirza, Dust Muhammad refers to Shaykh Muhammad as a calligrapher “who in speed and power of pen is unequaled in the world.”[5] Writing at the end of the 16th century, Qadi Ahmad also describes Shaykh Muhammad as “an excellent artist, gilder [illuminator]…, and scribe”[6] who worked in Mashhad for Sultan Ibrahim Mirza, Tahmasp’s nephew. Since no works by Shaykh Muhammad bear dates earlier than 1552, “The First ‘Joust of the Rooks’” could have been produced in the 1540s. The heavy brownish paper of this page differs from that of the other folios in Shah Tahmasp’s Shahnameh (Book of Kings), suggesting that, like “Haftvad and the Worm” (AKM164), it was likely added after the project’s completion.[7]

Notes
[1] Qadi Ahmad noted that Shaykh Muhammad came from Sabzavar in Khurasan and was a pupil of Dust-i Divaneh, a painter not to be confused with Dust Muhammad the calligrapher. See Adle, 235–276.
[2] Unlike the rocks in Sultan Muhammad’s paintings (e. g., “Court of Kayumars” (AKM165) that are inhabited with humans and recognizable animals, these are more suggestive of living forms than explicitly representational. This detail as well as the gnarled tree in the landscape led S.C. Welch to attribute the painting to Shaykh Muhammad. See Welch 1979, no. 27.
[3] For a discussion of the Haft Awrang and Shaykh Muhammad’s contributions, see Simpson, 107 and 112, n. 21; also see Welch 1976, 108–9, 112–113, and 122–127.
[4] In his painting, “Emperor Humayun and Hindal Mirza” Dust-i Divaneh includes a large rock figure of an elephant (see Staatsbibliothek Preussischer Kulturbesitz, Berlin, Orientabteilung, Libr. Pict. A 117, folio 15r). Even if the elephant resembles a rock formation in a known picnic spot near Kabul, its incorporation in Dust-i Divaneh’s multifigure composition raises the question of whether Shaykh Muhammad absorbed the idea from his teacher before his departure, perhaps from works by Dust that are now lost. See Parodi, 7 and 10­–13.
[5] See Thackston, 348.
[6] See Qadi Ahmad/Minorsky, 187–188.
[7] See Welch 1979, no. 27.