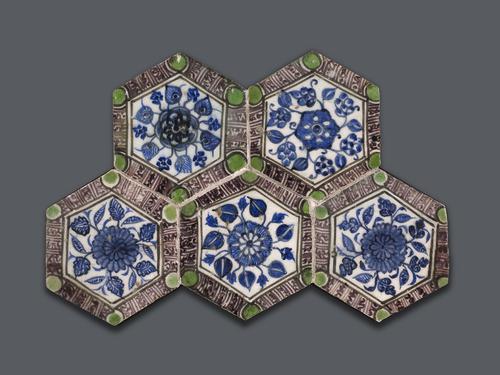 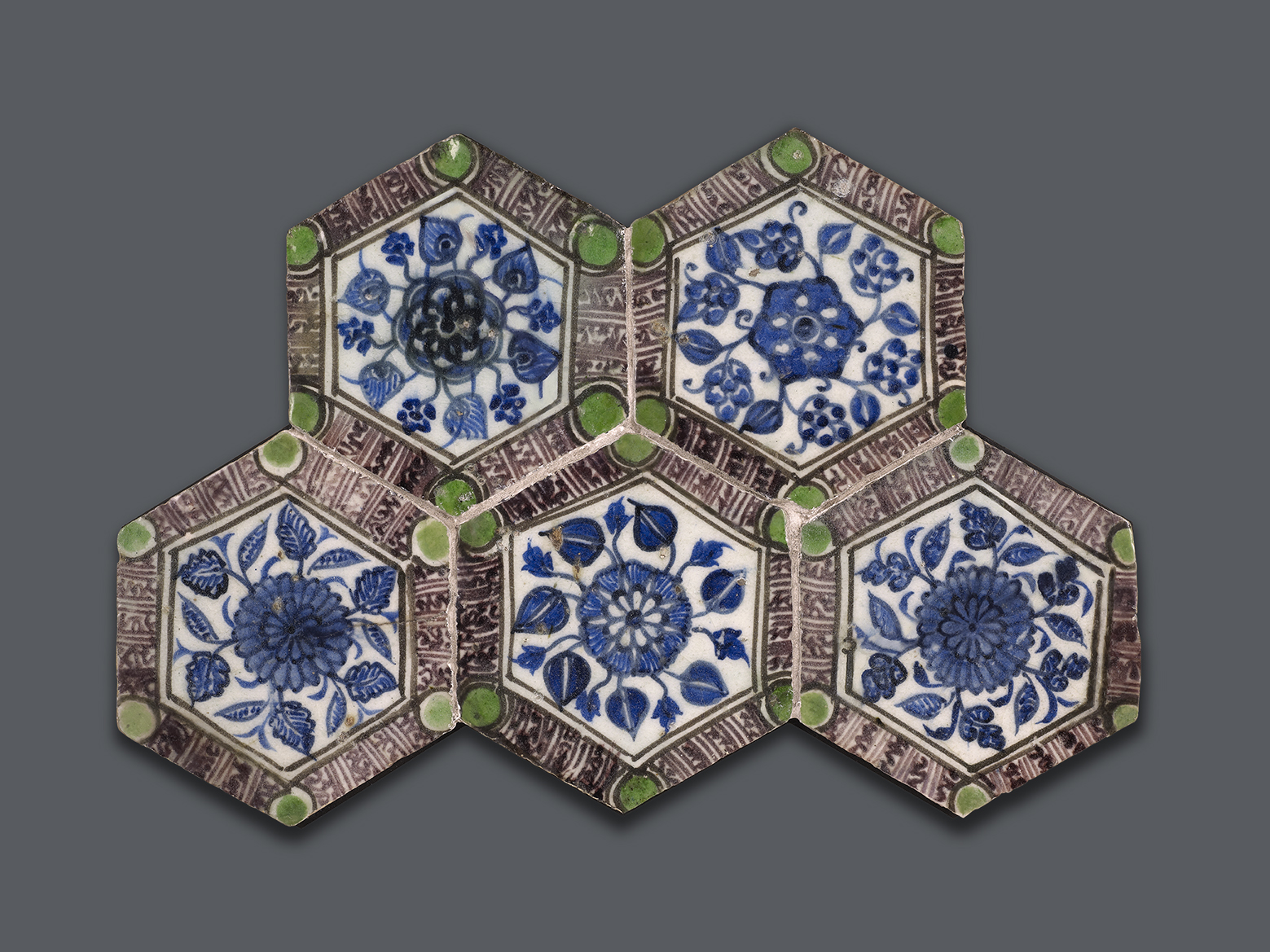 The entire corpus of these blue-and-white hexagonal tiles has been stylistically related to the Chinese blue-and-white porcelains imported into 15th-century Syria. However, Lisa Golombek has suggested that those examples with a central rosette, like the AKM874 tiles, did not copy motifs directly from Chinese wares. Rather, they may have been influenced by Yuan porcelain via pattern-books or local traditions which had already partially assimilated Chinese sources. [1]

Looking more closely at these tiles in the Aga Khan Museum Collection, distinctive features emerge. In contrast to other groups of 15th-century Syrian tiles, the blue-and-white floral motifs in the centre of each tile are less whirling and painted in a slightly softer blue than many other examples, giving them a slightly more sedate appearance. Furthermore, the very strong emphasis placed on the borders of the present group is unusual, as is the use of an apple green colour alongside the standard cobalt blue and the slightly less common manganese. The heavily outlined green circles occupying the points of intersection between each pair of sides are also a rare feature, and are rather reminiscent of the false "nail-heads" sometimes imitated in ceramic on glazed fritware objects from medieval Iran.[2]

More typical of other hexagonal tiles from 15th-century Syria is the dark manganese-purple border motif of triple bars alternating with quickly executed scrolling designs that, in places, are little more than dots. The distinctive design appears in cobalt blue, in the interstitial zones between the points of a six-pointed star and the tile edge, on tiles found in the tomb of Ghars al-Din al-Khalil al-Tawrizi.[3] Hexagonal tiles of comparable dimensions bearing blue-and-white motifs survive in situ at the mausoleum of Murad II in Edirne, Turkey, built 1435–36;[4] on two tiles from the Madina Collection of Islamic Art,[5] now in Los Angeles County Museum of Art;[6] and on examples now in the British Museum as well as in the Victoria and Albert Museum.[7] A group of hexagonal tiles with manganese purple border, but without green circles, is mentioned by Arthur Millner, who identifies them as Damascene and dates them to the first half of the 15th century.[8] Dating the Aga Khan Museum tiles to the 15th century is therefore plausible.