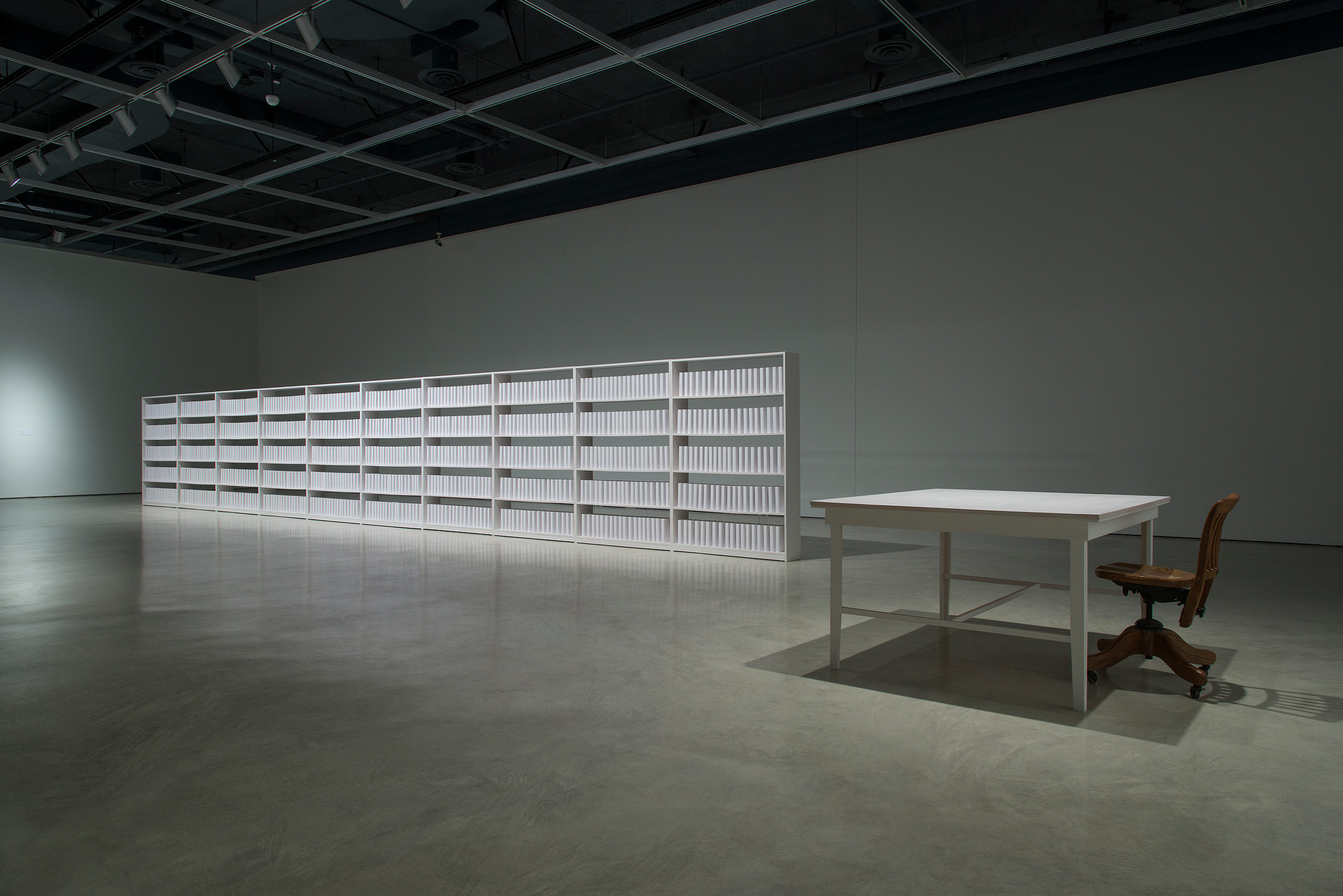 From Baghdad to Timbuktu: Libraries Rising from the Ashes

Throughout history, monuments, architecture, libraries and works of art have been subject to systematic damage and destruction in an attempt to erase knowledge and artistic achievements.

Throughout history, culture has often been targeted during times of conflict.  Monuments, architecture, libraries and works of art have been subject to systematic damage and destruction in an attempt to erase knowledge and artistic achievements.  As this installation attests, recent conflicts in Iraq and Mali offer devastating examples. History presents many others: from the Imperial Library of Constantinople (1204), to China's Old Summer Palace (1800-60), Warsaw's Old Town (1939), the National Library Sarajevo (1992), to the ancient city of Palmyra (2015).

Paradoxically, what makes cultural heritage so vulnerable to attack is its inherent power. It holds collective memory and shapes identity, reminding us of who we are and why we are here.

Efforts to protect and rebuild this heritage are acts of resistance. They are also acts of hope, striving to heal a society by restoring human dignity.

Wafaa Bilal’s contemporary artwork starts out as shelves of blank white books. Over the run of the exhibition, visitors transform the installation – and change the lives of students and faculty at the University of Baghdad’s College of Fine Arts – by donating educational texts.

Visit the exhibition or read on to find out how you can participate in social change by helping to rebuild the College’s lost library!

MOURNING A 13TH-CENTURY LIBRARY AND REBUILDING A 21ST-CENTURY ONE

In 2003, the College of Fine Arts at the University of Baghdad lost their entire library due to looters who set fire to the collection during the invasion of Iraq. More than 70,000 books were destroyed. Fifteen years later, students at the college still have few remnants from which to study.

Iraq has a long history of cultural destruction. During the Islamic Golden Age in the 13th century, an invading Mongol army set fire to all the libraries of Baghdad, including the famed House of Wisdom, or Bayt al-Hikma. Legend describes the invaders throwing the Bayt al-Hikma’s entire library into the Tigris River to create a bridge of books for their army to cross. The pages bled ink into the river for seven days (168 hours), at the end of which the books were drained of knowledge.

168:01 refers to the first moment when grief is transformed into a call to action, signaling the beginning of a struggle to move forward from the ashes of ruin. As a monument, 168:01 mourns the loss of the College of Fine Arts Library with a site-specific installation presenting thousands of books of empty pages filling out rows of shelves. Visitors to the installation become participants, linked directly to the students and faculty in Baghdad.

HOW YOU CAN PARTICIPATE AND MAKE A DIFFERENCE

“The work needed to be participatory and needed to have tangible results, not only to engage people who come to encounter the show but also so it would benefit people on the ground in Iraq.”
– Wafaa Bilal

Here, hushed stacks take on the oppressive silence of a tomb, suggesting that cultural destruction is a sustained and compounded loss, re-victimizing each student whose continued lack of educational materials keeps them trapped at the point of devastation. But visitors to the white library encounter a space of duality—a memorial of loss whose persistently austere palette has been transformed into a platform for change. The transformation is multiple … The installation becomes activated from a sterile memorial to a system of exchange, trading blank art books for academic texts and the open possibilities that education affords.

As a platform for encounters, 168:01 generates narratives that multiply beyond its initial scope. For its original exhibition at the Art Gallery of Windsor in 2016, viewers also chose to become volunteers. A spontaneous network of retired librarians offered their time and expertise to develop an open source digital index that catalogues the libraries of all major fine arts schools around the world, thereby paving the way for 168:01 to construct a library on par with any world-class institution of higher learning. Rather than merely replicating its lost archives, 168:01 could now seek to build a database of knowledge that will push the College of Fine Arts Library beyond restoration and into future growth. The transformative encounters among the dispersed network of individuals participating in 168:01 cross steep cultural chasms, connecting distant localities through their combined efforts and shared hopes of building a brighter future.

Iraqi-born artist Wafaa Bilal, an Associate Arts Professor at New York University’s Tisch School of the Arts, is known internationally for his online performative and interactive works provoking dialogue about international politics and internal dynamics. For his 2007 installation Domestic Tension, Bilal spent a month in a Chicago gallery with a paintball gun that people could shoot at him over the internet. The Chicago Tribune called it “one of the sharpest works of political art to be seen in a long time” and named him 2008 Artist of the Year. Bilal’s work is constantly informed by the experience of fleeing his homeland and existing simultaneously in two worlds – his home in the “comfort zone” of the U.S. and his consciousness of the “conflict zone” in Iraq. Using his own body as a medium, Bilal continued to challenge our comfort zone with projects like 3rdi and …and Counting. Bilal’s most recent body of work, Canto III, premiered in a solo booth at the New York Armory Show in 2015 and went on to be shown in the 2015 Venice Biennale. In 2008, City Lights published Shoot an Iraqi: Art, Life and Resistance Under the Gun, about Bilal’s life and the Domestic Tension project. He holds a BFA from the University of New Mexico and an MFA from the School of the Art Institute of Chicago. His work can be found in the permanent collections of the Los Angeles County Museum of Art, the Museum of Contemporary Photography in Chicago, and the Arab Museum of Modern Art in Doha, among others.

Conflict remains one of the greatest risks to a country’s cultural heritage. In 2012, as the armed conflict that had broken out in Mali escalated in the area around Timbuktu, fear grew for the safety of the many libraries in the region. Home to countless volumes of manuscripts, some dating back to the 13th century, the libraries and their holdings are irreplaceable symbols of Mali’s rich literary heritage.

The film Tutto è Scritto (Everything is Written) documents the work that was undertaken by teams of people to evacuate the manuscripts to places of safekeeping, and the work that is being done today to preserve, protect, and digitize them. The film was directed by Marco Pavan and produced by the Fondazione Benetton’s Imago Mundi project.

Born in Treviso, Italy, in 1984, Filmmaker Marco Pavan’s parents showed him a deep passion for travelling, discovering the other, the different from ourselves, and the passion for Art in its many forms. After graduating in Communication Studies at the University of Padova he began freelancing for a number of Italian magazines. Pavan went on to pursue a Master’s degree in photojournalism and documentary photography at the London College of Communication. Marco Pavan has since worked at Fabrica, the Benetton Group Communications Research Center in photography with a focus on multimedia. As multimedia producer for Imago Mundi (www.imagomundiart.com), he directed some documentaries about the relationship between artists and the place they live in.

The Globe and Mail, July 11, 2018
A library rises from the ashes in Wafaa Bilal's new Aga Khan Museum installation

The Toronto Star, July 18, 2018
Visitors to the Aga Khan Museum can help rebuild a destroyed Iraq library, book by book

How To Get Here