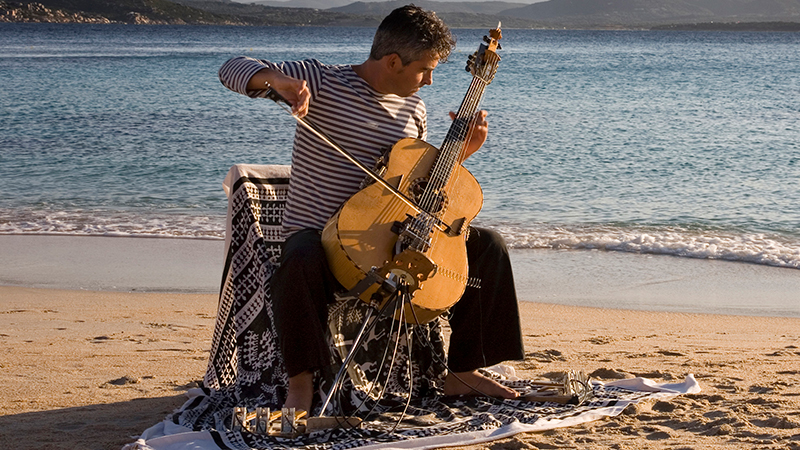 “Watch, listen, and be amazed” (NPR Music) as Sardinian musician Paolo Angeli takes to the stage with his very own modified instrument: an 18-stringed hybrid of guitar, baritone, violoncello, and drums. Adorned with hammers, pedals, and even propellers operating at various speeds, Angelia’s instrument enables a wholly new type of performance — one combining, referencing, and transcending free jazz, folk noise, and minimal pop music.

This event includes an appearance by special guest and electric violinist Dr. Draw, who, like Angeli, has reinvented an instrument and sound to reintroduce us to music and the unlimited possibilities of artistry. The result is a new form of dance music centred on an instrument and tradition not generally known for getting people out of their seats.

Sardinian musician Paolo Angeli’s professional career was spent deep in the avant garde, exploring post-rock, experimental opera, and more. His style was influenced heavily by that of guitarist Giovanni Scanu, who was a major proponent of the classic Sardinian canto a chitarra style. The combination of inputs inspired Angeli to create his own instrument: an 18-stringed hybrid of guitar, baritone, violoncello, and drums, adorned with hammers, pedals, and even propellers operating at various speeds. Working closely with craftsman Francesco Concas, Angeli created an instrument that enables an altogether new type of performance combining, referencing, and transcending free jazz, folk noise, and minimal pop.

Dr. Draw, like Paolo Angeli, has taken something familiar and reinvented it. Having ventured from rock and classical into electronic music culture, his style of playing is difficult to describe as his history with music and culture spans an eccentric lifetime. From playing for royalty in Prague to creating near chaos at the Toronto Beaches Jazz Festival and performing at events for luxury brands, Dr. Draw has made appearances across Singapore, Taiwan, Sri Lanka, Hong Kong, Malaysia, and South Korea. Performing in such frenetic locales energizes the performer time and time again, allowing him to creatively interact with cultures all across the world. The result is a constantly evolving musical style that brings together the seemingly disparate elements of classical violin, jazz-rock fusion, folk, and pop into a riveting blend that feeds and invigorates the soul.