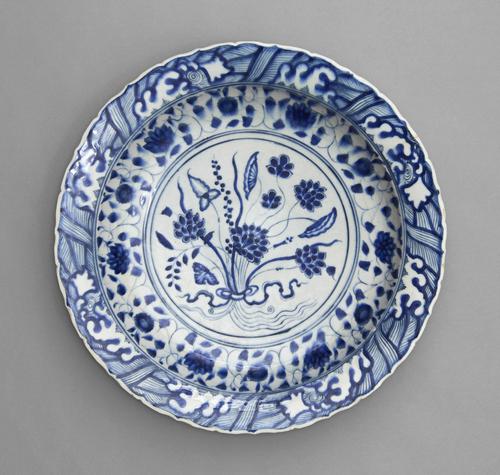 AKM886, Blue-and-white dish based on a Chinese model 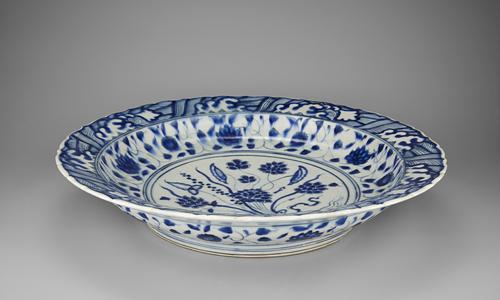 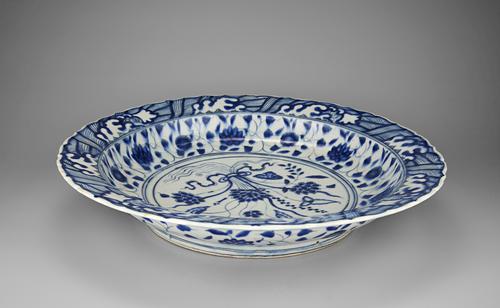 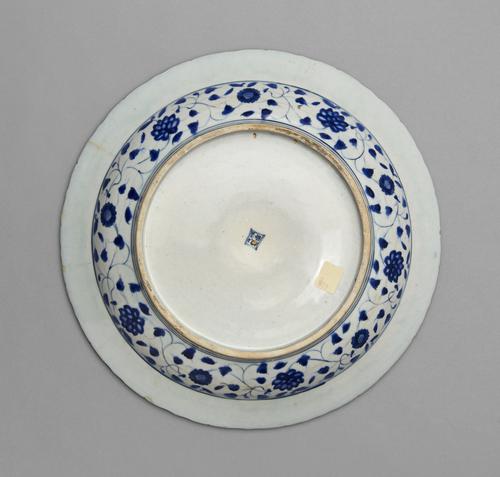 AKM886, Blue-and-white dish based on a Chinese model, Bottom 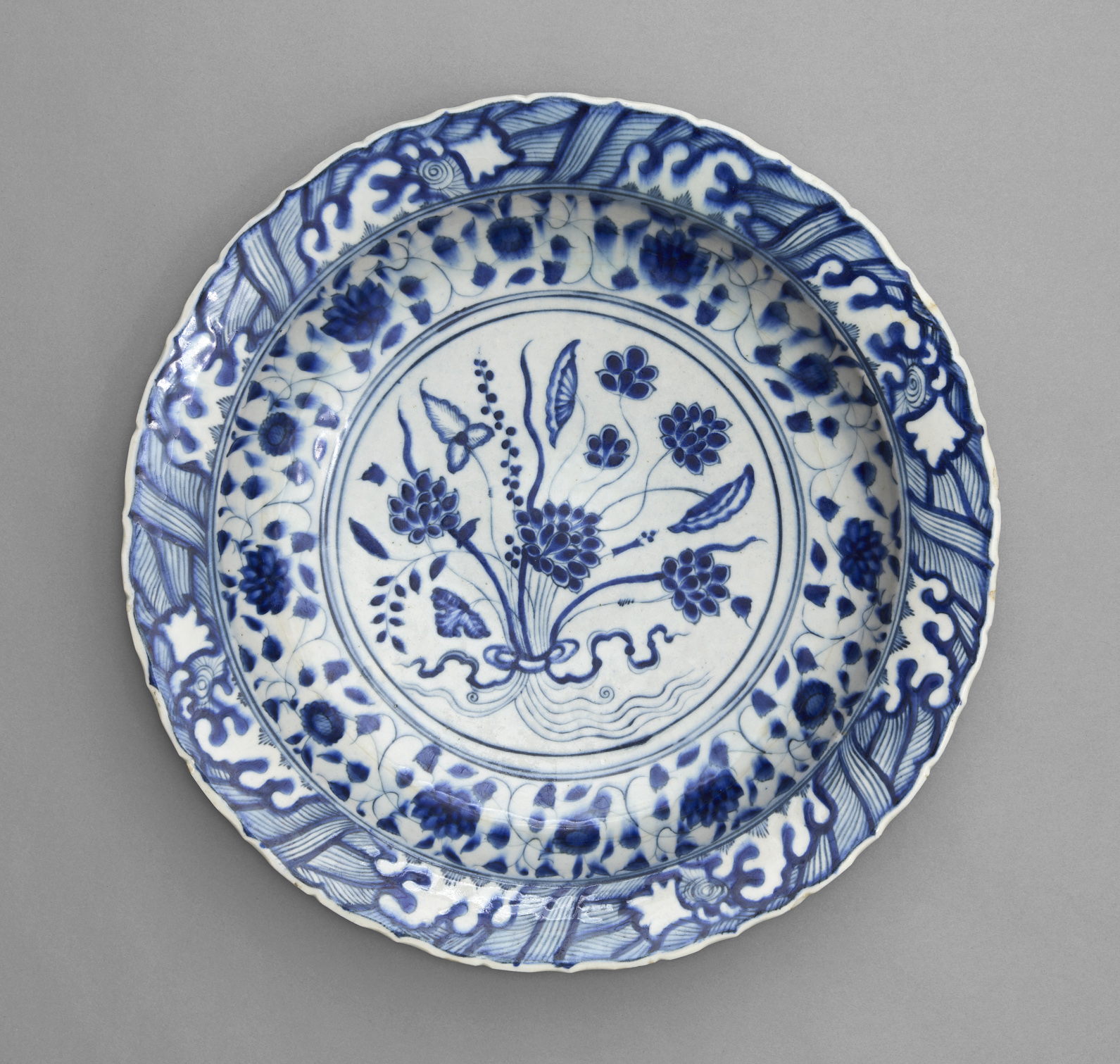 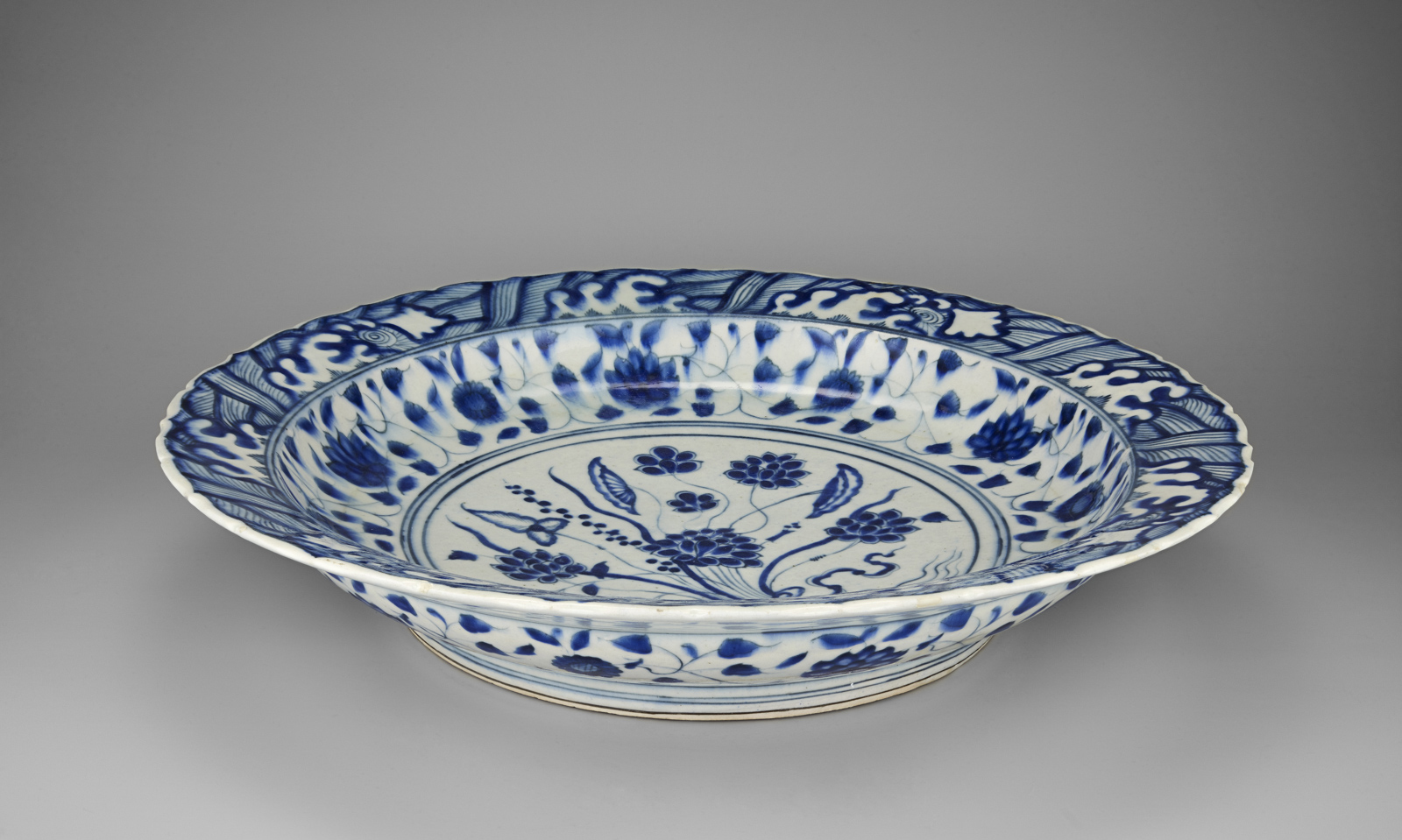 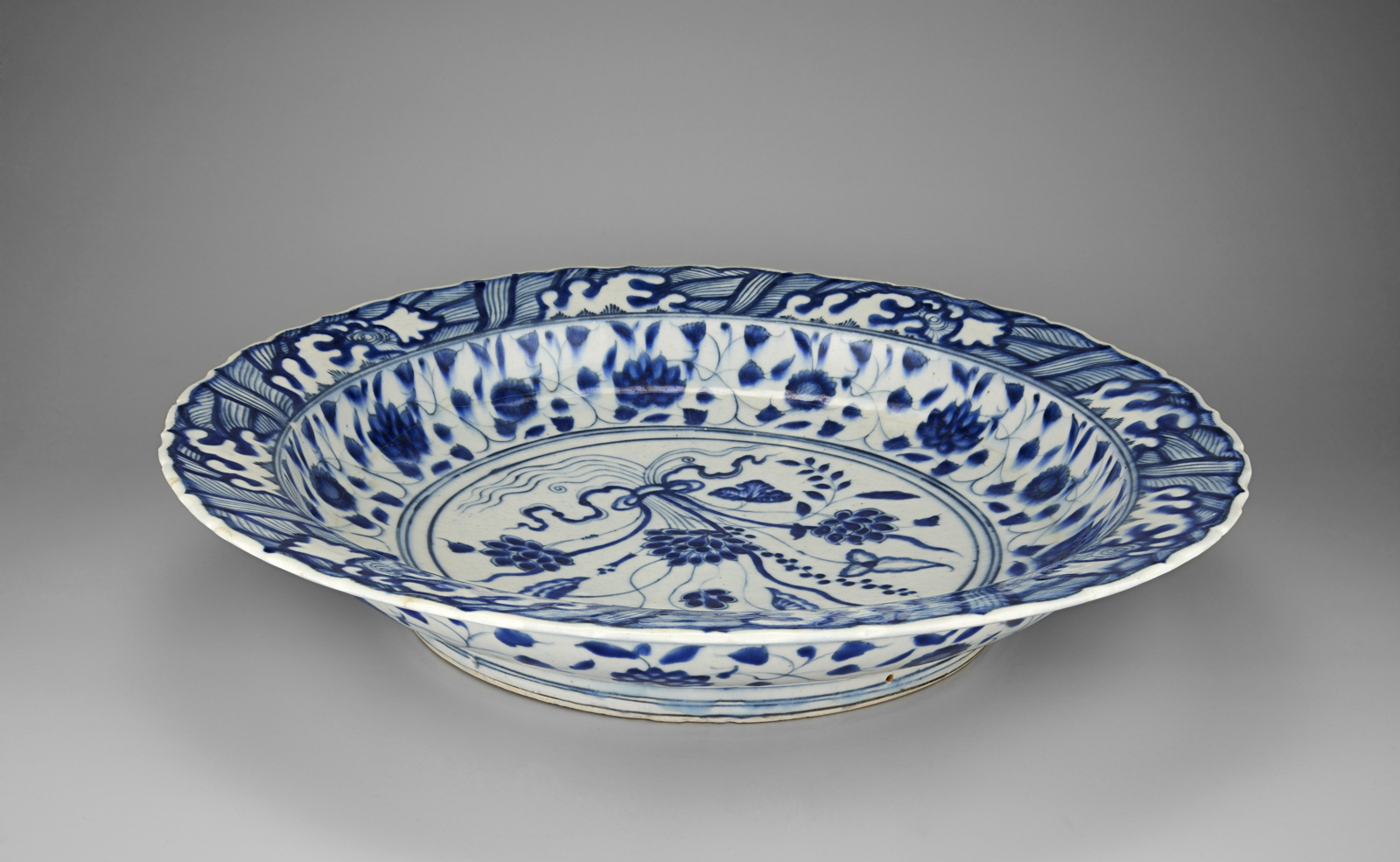 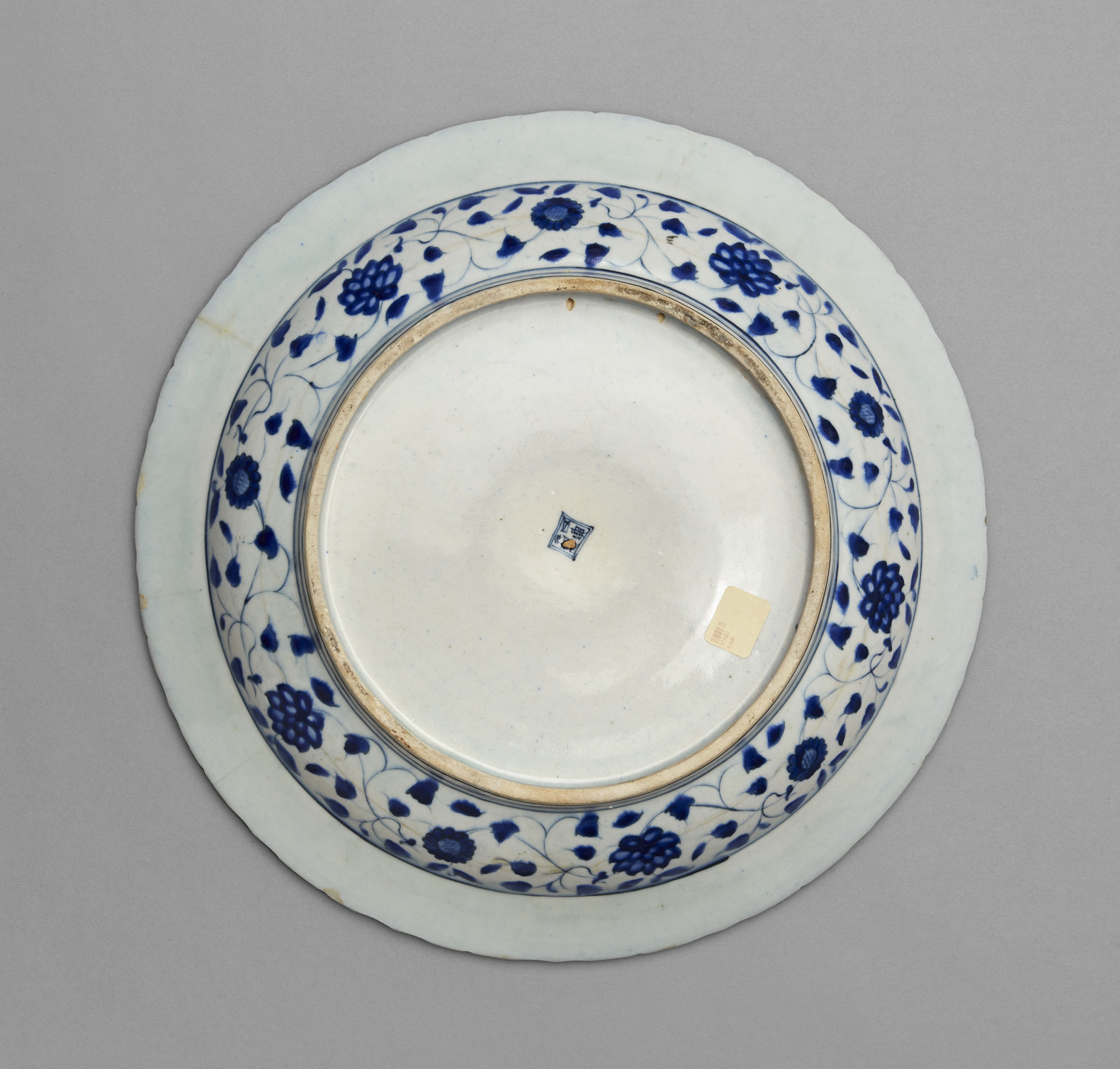 Blue-and-white dish based on a Chinese model

This dish from the Aga Khan Museum Collection follows a Chinese model so closely that it might have passed for a Chinese original if the body had been translucent like porcelain. While the Persian potter had the skill to reproduce the Chinese designs, he did not have the clay—called kaolin—to make true porcelain. Instead, he created a brilliant white body from stonepaste, which is composed of finely ground quartz and a small amount of clay. This technique was invented by the potters of Egypt and Syria as early as the 12th century.

The Chinese model for this dish dates from the early Ming period (ca. 1410). The wide-based shape and bracketed rim were customary for Ming export porcelain. The lotus-bouquet of the central design, painted in cobalt blue with black outlining, is tied by a ribbon, the thin stems of the plant undulating as if in water. The Persian painter followed the model very closely, even simulating the “heaped-and-piled” brushwork—the use of dark and light variation in the cobalt pigment. The rim has the common Ming "cresting wave” border. The inner walls, as well as the exterior walls, are painted with a lotus scroll design, just as would have been done on the Chinese original. On the glazed base there is a black square with four small motifs inside it, resembling the Chinese reign marks (nianhao) often painted on the base by Ming potters.

The potter who made this dish worked in the city of Kerman, a major urban centre located in southeastern Iran, on one of the routes leading from the Persian Gulf toward the Safavid capital Isfahan. Kerman became a centre for the production of chinoiserie ceramics in the early 17th century. European travellers visiting at the time write of the finest wares originating here and at Mashhad, in northeastern Iran. Archaeological evidence has confirmed that Kerman did produce many types of fine Safavid ceramics. The Ming lotus-bouquet theme was a favourite among Kerman potters, though not all products were as successful a copy as this dish. The use of black lines and the square potter’s mark help us to date this dish ca. 1640, after which the Kerman potters abandoned the use of black outlines and traded the square potter’s mark for a blue tassel-like mark.

The fact that the dish uses a model already 200 years old and not a contemporary import raises the question of how this was possible. Potters could probably find early models in the antiquarian collections of the princes and aristocracy of Iran. Several large collections were assembled during the Safavid period, that of Shah Abbas (r. 1588–1629) at the shrine of Shaykh Safi (d. 1334) in Ardabil being the best known. Safi was a revered Sufi shaykh, the ancestor of the Safavids, after whom the dynasty took its name. His shrine with its porcelain collection was displayed in the splendid chini-khaneh (china pavilion) built by the Shah in 1604. Most likely several antique models caught the eye of the potter of this dish because he conflated different border designs, transforming the rocks of the “cresting wave” into a basket-weave pattern.