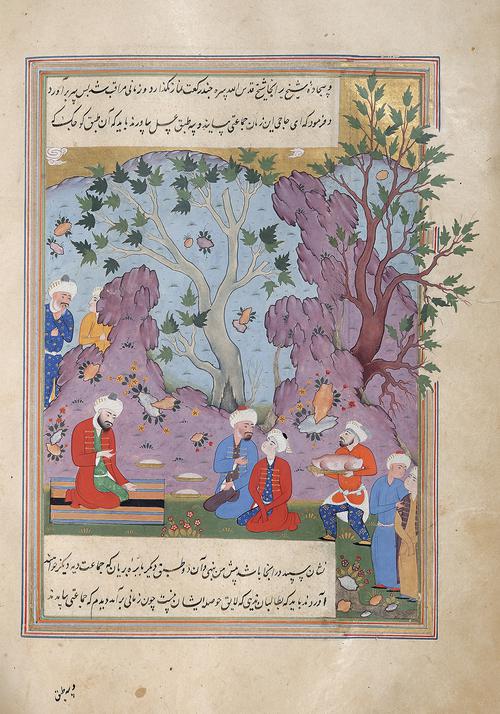 AKM264, Shaykh Safi al-Din asking his disciples to accept honey from the villagers but not meat, fol.329v 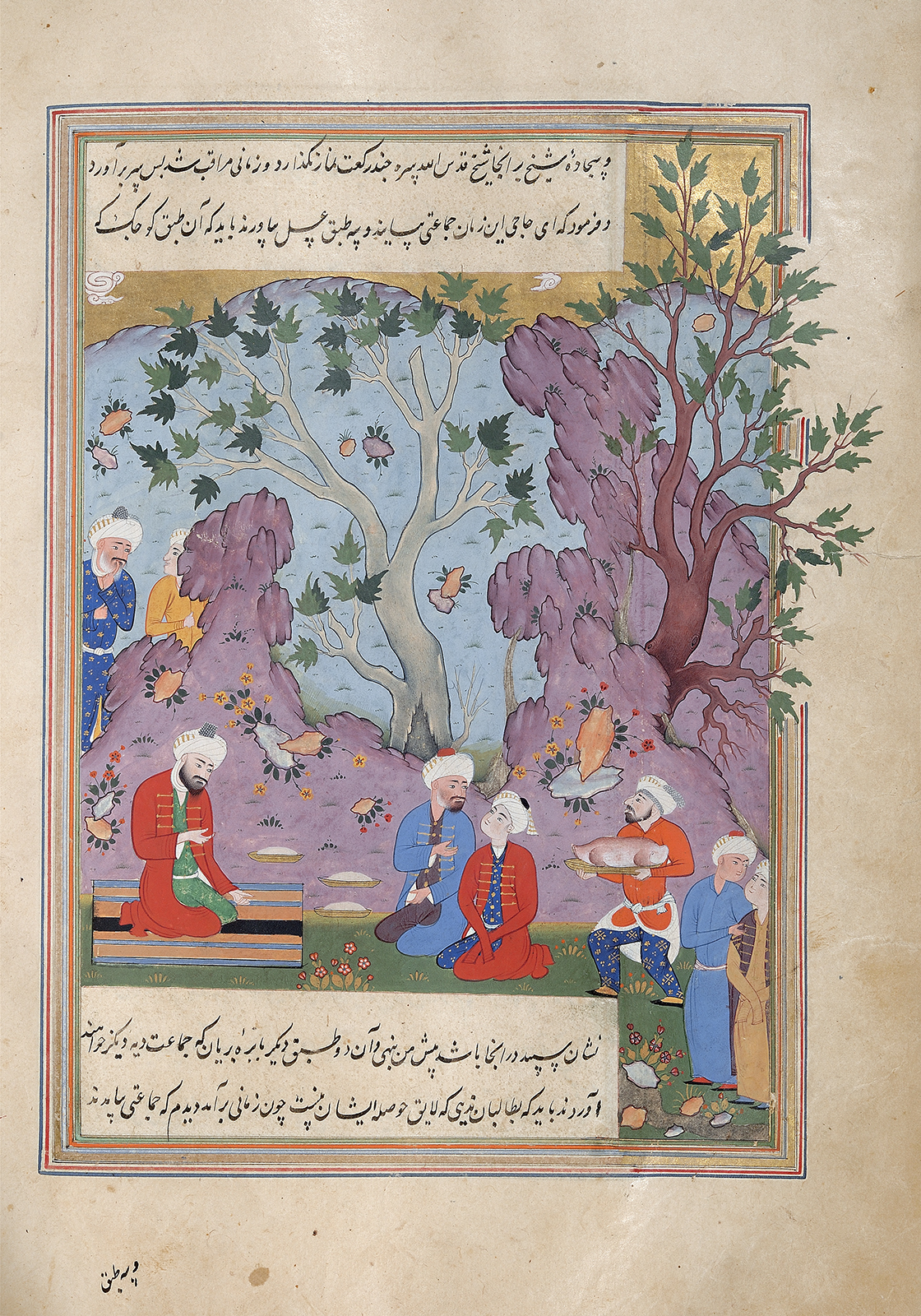 From the manuscript of Safvat al-Safa (The Quintessence of Purity), the hagiography of Shaykh Safi al-Din Ishaq Ardabili (1252/3–1334)

This version of Safvat al-Safa was completed in 1582 in Shiraz, one of the important manuscript centres of its time. Rather than relying exclusively on the original text written by Isma’il bin Bazzaz (d. 1391–92), it includes revised text produced in 1533 during the reign of Shah Tahmasp (r. 1524–1576). The author of the new version, Shi’ite jurist Abu’l-Fath al-Husaini (d. 1568–69), added a preface and an appendix and wrote that the Safavids had descended from the seventh Imam Musa al-Kazim, thus producing an “official version” of the origin of the Safavids.

This version of Safvat al-Safa is a fine example of the 1580s Shiraz workshops with its gold-painted leather binding; double-page illumination; blue, gold, and red-lined rulers on its 509 folios; and neat Nasta’liq script with highlighted words and phrases in red, blue, gold or orange. Its illustration cycle seems to be very well-organized with regard to the choice of topics and the diversity of its compositions. Moreover, its paintings are skillfully executed and strongly reflective of their accompanying text. They also share features of other contemporary illustrated manuscripts from Shiraz, including vibrant colours, crowded compositions with figures shown in various angles, detailed and repetitive decoration on the surfaces, and plain flora enriched with trees. The visual program of this Safvat al-Safa represents the shaykh as the protagonist in most of its illustrations.

The seventh chapter which relates virtues of Shaykh Safi is the most illustrated part of the manuscript. The first painting, “Shaykh Safi al-Din asking his disciples to accept honey from the villagers but not meat,” occurs in the second section where Shaykh Safi talks about the arrival of two groups while they were travelling in the country. One of the groups would be bringing three plates of honey and the other a tray of roasted lamb. The shaykh tells his disciples to have only one plate of honey, leaving the rest untouched. Some time later two groups bring the anticipated food and the shaykh takes the small plate of honey while the other plates are not served. After a brief investigation, it becomes clear that there are suspicions about the sources of the food, and this incident indicates the shaykh’s miraculous sense about future events. The illustration depicts the time after the shaykh told his people about the upcoming treats with the honey plates and the lamb tray.

The records of ownership and several seals in this version of Safvat al-Safa display its value and popularity even centuries after the shaykh's death. On f.509a a seal, bearing the date 1281 (1864–65) and the name “Tahmasb al-Husayni” written in the form of a tughra, is stamped on each side of the triangular colophon. Another record (this time on f. 509b) reads: “This book is very precious and it is a unique copy. Therefore, I am making the following vow that I will not sell this book. If I do, I will make the pilgrimage, and if I die before completing it, I will leave money for the Sayyids so that you (God) witness that I have kept my word.” Unfortunately there are no records on the actual identity of the owner(s).

Safvat al-Safa is one of the rare examples of the illustrated biographies produced in Shiraz in the sixteenth century. Among such works are Tuhfa-yi Sami (1550-52), a poet biography by Sam Mirza (d. 1566), son of Shah Isma'il (r. 1502-1524); Majalis al-'Ushshaq (1503), a biography of the royal prices, eminent people of the age, and famous mystics by Kamal al-Din Husain Gazurgahi (d. ca. 1503-4), Sultan Husain's (r. 1469-1506) intimate companion. Illustrated biographical works started to be produced in Shiraz by as early as 1550, though rapidly increased by the 1570s with many Majalis al-'Ushshaq copies. Although there are some sytlistic differences or changes in the painting cycles depending on each work, it is clear that Majalis al-'Ushshaq is admired as a new subject and therefore many illustrated copies are prepared in Shiraz in the second half of the sixteenth century.