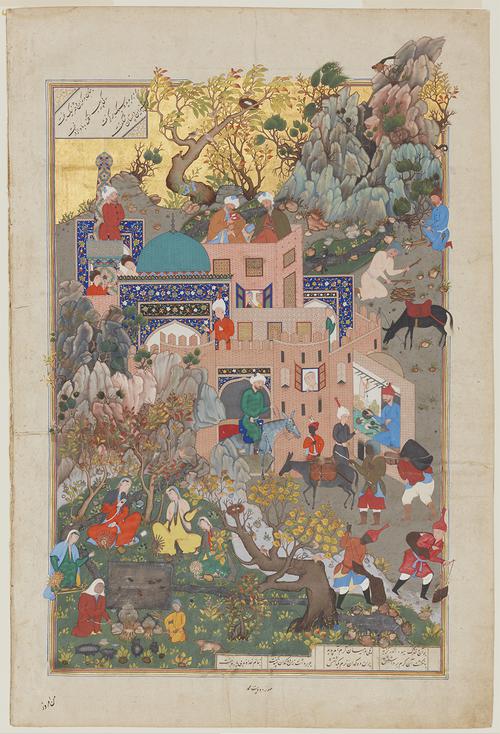 AKM164, Haftvad and the Worm, Front 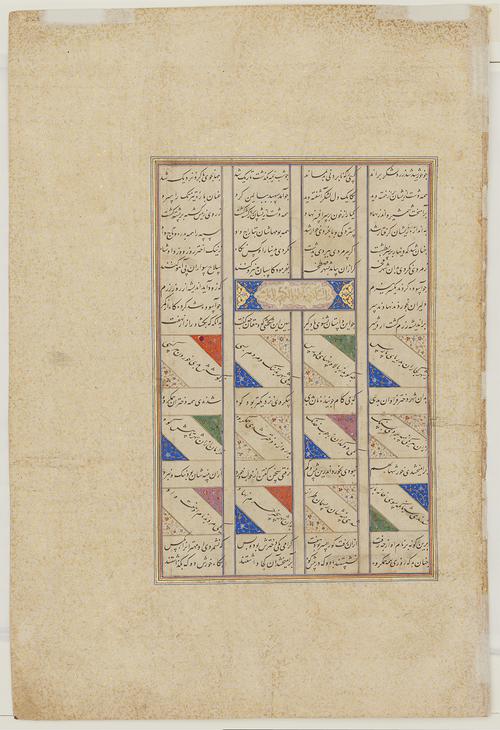 AKM164, Haftvad and the Worm, Back 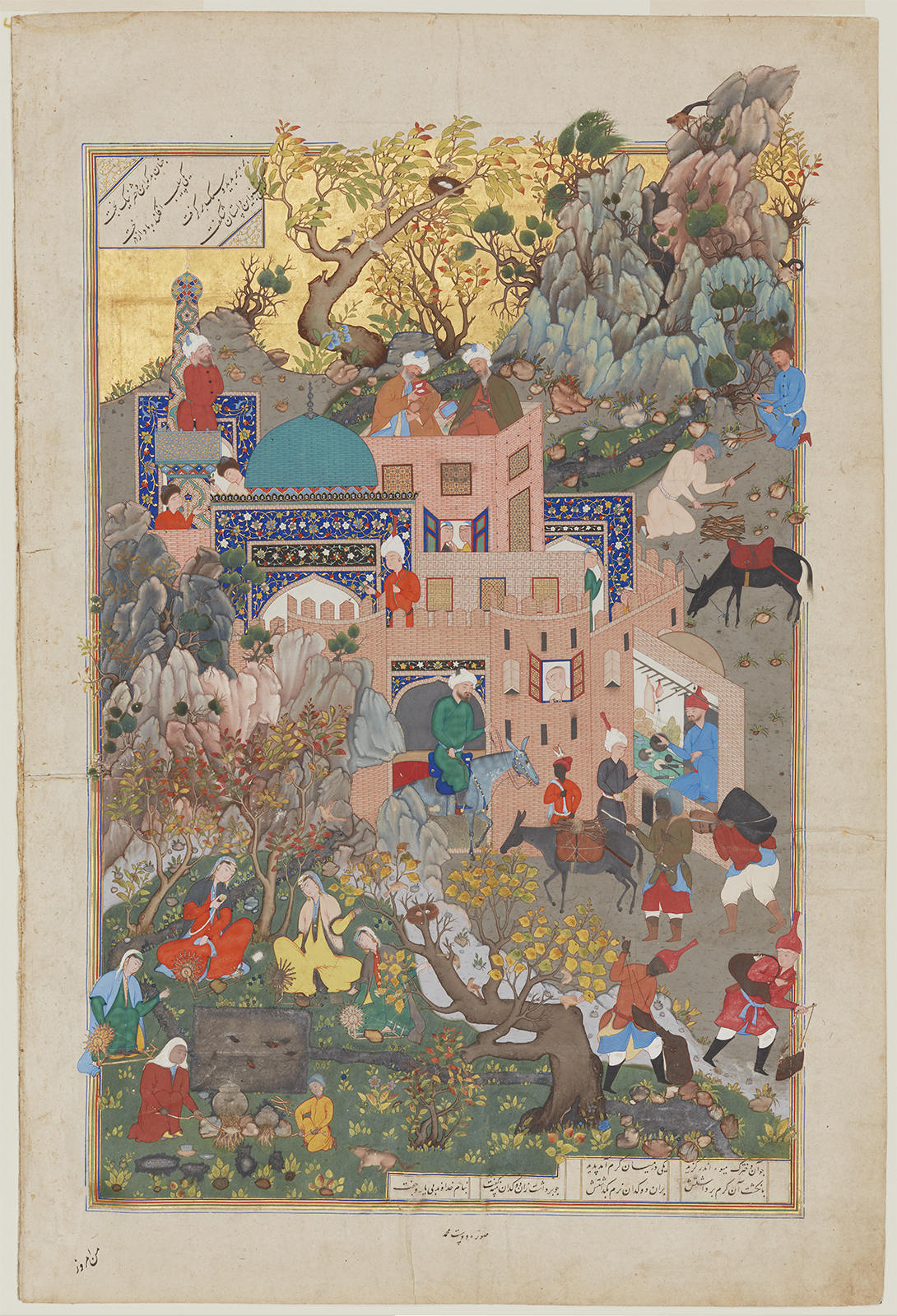 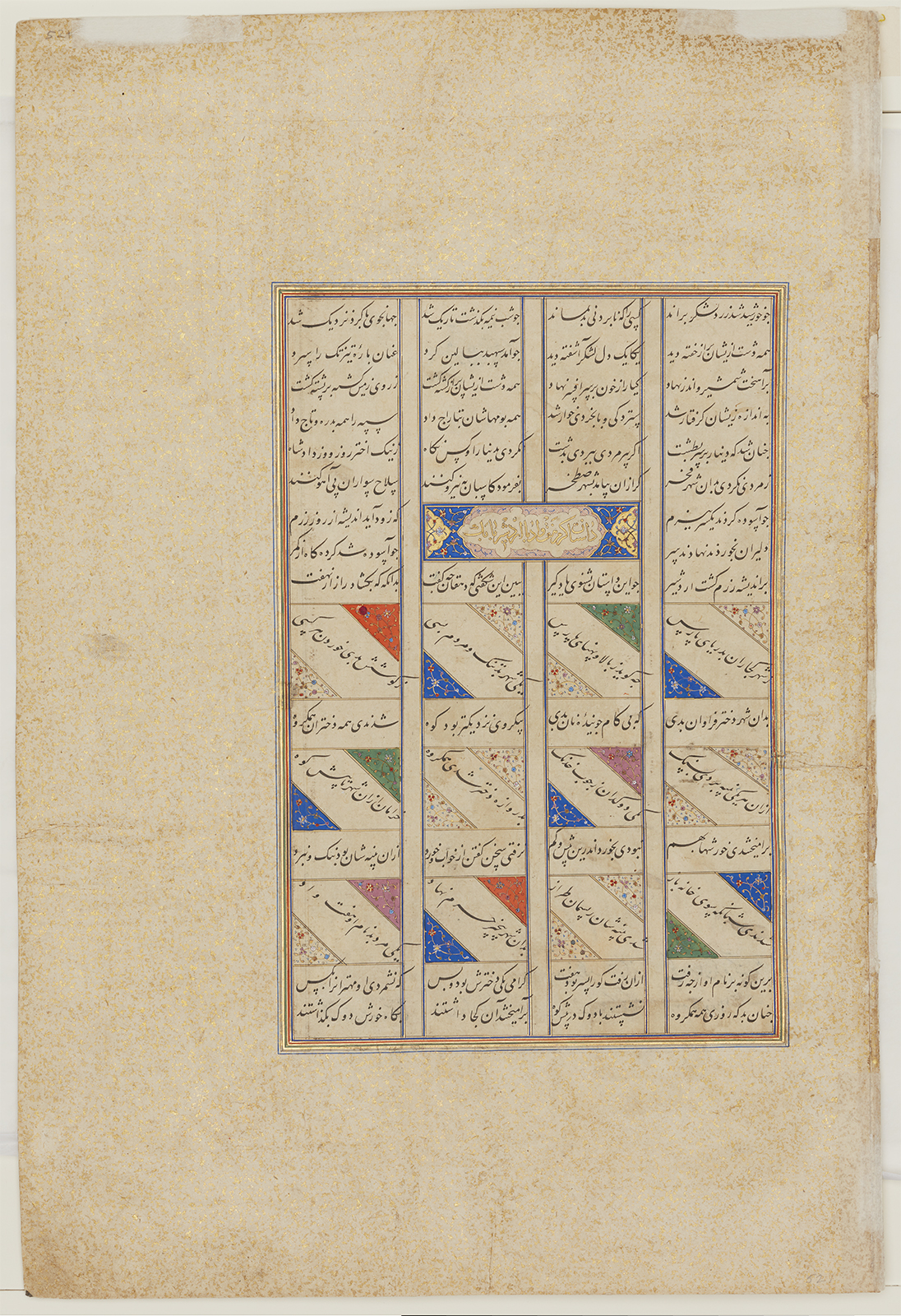 Several incidents of Haftvad’s story are combined within this exceptionally large painting. The first episode is depicted at the lower left, where young girls with spinning wheels cluster around a rectangular pool. Here, Haftvad’s daughter (depicted in a red robe) has taken a bite from an apple and discovered a worm. Declaring that the worm will bring her good luck in spinning, the girl decides to keep the worm with her in a distaff box (shown at her feet). From that day forward, Haftvad’s daughter indeed outspins her friends. Her output only continues to increase, and with it, the town’s prosperity. In this painting, such affluence is captured in details, including ornately tiled buildings (for example, a mosque with a turquoise dome), and industrious workers involved in activities such as collecting firewood, selling foodstuffs, and planting seeds. Later elements of the story are suggested by three figures: a man in green before the town gate; a young man wearing a Safavid turban; and another figure in Safavid garb on the ramparts above the gate holding a bow and arrow.

These figures allude to the tragic outcome of the story. The man in green is Shah Ardashir (r. 224–39), founder of the Sasanian Dynasty, who believes the worm to be a threat to his royal authority. In the company of an accomplice (the man in the turban), he disguises himself as a merchant and gains access to the worm, now grown so large as to require its own fortress-like lodging. Ardashir kills the worm by pouring boiling lead down its throat. His soldiers (suggested in this painting by the armed man on the ramparts) then seize the town and execute Haftvad and his seven sons.

As is evident from the absence of gold-sprinkling in the borders, this page was added to the Shahnameh after the manuscript’s completion. The painting is attributed to Dust Muhammad, who completed five other paintings in Shah Tahmasp’s Shahnameh. Stylistic traits associated with Dust Muhammad abound, such as the pair of long-faced greybeards on the roof and the oddly bent tree trunk in the foreground. Other elements—such as the collapsing of time and inclusion of multiple figures—recall illustrations for the 1539–43 Khamseh of Nizami in the British Library (Or. 2265, folio 195), executed by Dust Muhammad’s contemporary, Mir Sayyid ‘Ali and commissioned by Shah Tahmasp. These shared stylistic features suggest that “Haftvad and the Worm” was completed around 1540.[1]

Notes
[1] Dust Muhammad left Iran for India in reaction to Shah Tahmasp’s 1534 prohibition against drinking wine, but the date of his departure and the fine points of his itinerary are debatable. While Dickson and Welch have attributed “Haftvad and the Worm” to Dust Muhammad while he was still working in Tabriz, it is possible that he produced it after leaving Tahmasp’s court atelier but before he reached India. See Dickson and Welch, vol. I, 127.